This was mostly just a travel day. After breakfast, we packed up and drove across Islay to catch the 1:00 ferry back to Kennacraig. From there we enjoyed a beautiful drive south, down the Kintyre peninsula, and into Campbeltown. After settling in and a little dinner, I ventured out for a drink. I was actually starting to think I might have one single malt free day - the horror! A 10 minute walk through some heavy winds brought me to the Ardshiel Hotel, and its world famous whisky bar. I was awestruck. 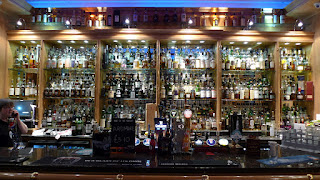 Later I learned that they had just reopened after a significant remodel, and many of the whisky bottles were still to be brought out of storage. The 450 bottles of single single malt on the shelves had another 400 waiting to join them. The owner would like the total to be over 1000 in the near future. 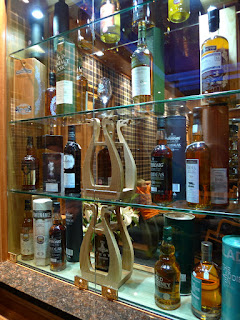 I went with the 10yr 100 proof Springbank, since it is being dropped from their product line soon and won’t be easy to get in the near future. Well rounded, nice balance and intensity of flavors. A great reminder of why I became enamored with this distillery some seven years ago.
Posted by VT Mike at 9:00 AM