I wanted to do something kind of special for my last full day on Islay (I know, I know, my first full day on Islay was pretty damn special). Bowmore is the only distillery on the island whose offerings that I’ve tried in recent years just didn’t impress me enough to inspire a visit. That leaves Laphroaig. 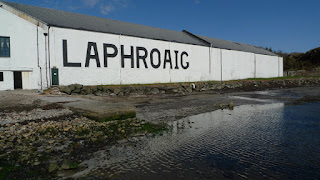 When I did my original research they had a tour that included walking to the water source, and then out to the peat fields to do some hand cutting, with tastings all along the way: sounded perfect. As the trip got closer, I started booking tours, and saw that Laphroaig had updated their website and changed their tours. The one that included cutting peat was now much longer and twice as expensive. But they had a new one called the Distiller’s Wares tour, which included samples drawn directly from several casks, after which you could fill a 250ml bottle with your favorite. I called and booked.

When we arrived at the distillery, I was quite disappointed to find out that they had some issues that need to be worked out before that tour would be available (perhaps paying duty on the casks that samples would be drawn from?). We were offered a tasting tour instead, which was less expensive than the one I had booked, but featured some very pricey bottlings. Sold!

We started with the standard distillery tour (photos allowed here!). I’ve come to learn that the smaller the group, the better the tour. With too many people, there is always someone in the way when you want to take a picture, the guides are harder to hear, and you feel bad asking a lot of questions while the guide is trying to corral everyone and keep them engaged. With a group of at least 15 college students on our tour, that was the case here, so I mostly hung back, trailed the group, and took pictures as everyone moved ahead. 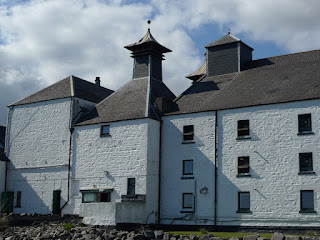 The stills at Laphroaig were quite small, but they have a lot of them (7 total, 3 wash and 4 spirit, but one spirit still is double the size of the others), giving them moderate capacity relative to the other operations on the island. 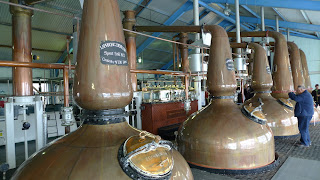 They also have a traditional floor malting for which they hand cut peat in the summer months. Of course this is still only enough to provide about 30% of the malted barley that they use. 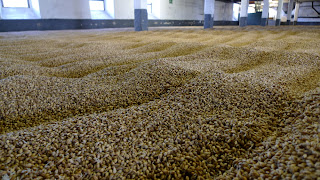 The bit of info I was excited to pick up was regarding the Quarter Cask. It is aged primarily in bourbon barrels (Laphroaig use 1st fill almost exclusively), then finished in ¼ size barrels. I had always assumed these were made from new oak. That is not the case, they are actually made from normal bourbon barrels which have been taken apart, cut down, and re-fitted into these smaller casks. 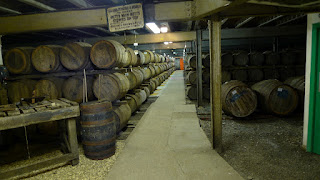 At the end of the tour, everyone got a sample of the Quarter Cask. One of my favorites, dense, rich, creamy texture, pungent smoke, long, reverberating. I love it!

After that, my father and I split off from the group for our private tasting. We went to a well appointed tasting room with our samples already poured when we walked in. We would be tasting through the flagship 10yr (common, but a good frame of reference to start with), the 25yr cask strength (only available at the distillery shop for £240), the Cairdeas 2008 Feis Ile (a special bottling for the 2008 Feis Ila festival, limited release, pretty hard to come by), and the Cairdeas 30yr (they used the Cairdeas name to differentiate it from a previous 30yr bottling with a different flavor profile, this one retails around £500). 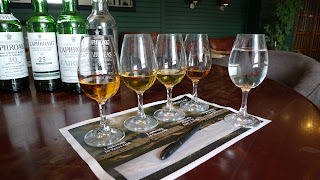 10yr, 40% abv, from first fill bourbon barrels, chill filtered (the 10yr is the only thing they chill filter). Smoke and sea spray on the nose. The palate starts off with a big wall of peat smoke and some sweetness which fades as the smoke builds and carries on. It finishes fairly dry, we were told this is a result of the chill filtering.

25yr, cask strength of 48.6% abv, ½ sherry casks, ½ bourbon barrels (not sure if they meant the number of casks/barrels of the amount of liquid, sherry casks can hold twice as much, so it could be 33% bourbon aged and 66% sherry aged, but judging by the color I kind of doubt that). Dark fruit and shoe polish on the nose. Mild restrained peat smoke, smooth, nice balance of mild smoke and dark fruit flavors.

Cairdeas (pronounced car-chas) 2008 Feis Ile, 55% abv, made from a vatting of 33 casks – two 17yr 2nd fill sherry butts and 31 bourbon barrels. The bourbon barrels were 9 to 15 years old when the liquid in them was transferred into fresh 1st fill bourbon barrels and aged for another 4 years. Strong peat and oak spice, warm and bourbon like. Interesting, but not my favorite.

Going from the 30yr to the 25yr, the smoke on the 25yr seems much more apparent. After going back and forth between the two, then tasting the 10yr again, it seems a bit uncivilized. As I sampled all four, the 25yr and the 30yr seemed to disappear much more quickly.
Posted by VT Mike at 8:45 PM