Today was the big day, with extensive tasting tours at Lagavulin and Ardbeg. Fortunately they are both within 3 miles of where I am staying.

We started at Lagavulin with the standard distillery tour in the morning. Usually these tours are given by someone who is fairly young and has only worked as a tour guide / retail shop employee. The guides are generally well informed, but you just can’t get the insight and depth that comes from an old timer who has worked every job at the distillery through their life. Our tour guide this morning was Marjorie, and she was somewhere between those two extremes. Being a bit older and married to a former Lagavulin distillery engineer (as well as her father having been a malt-man at Ardbeg many years ago), made her a very competent tour guide. 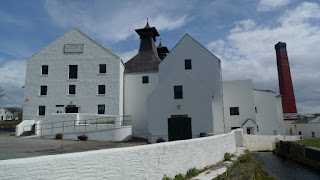 As I explained yesterday, we were told that the size of the cut (of spirit coming off the still) is something that differentiates Caol Ila and Lagavulin. Today we were told that Lagavulin has a slower distillation, which helps it retain its full peat intensity. They likened it to slow cooking food at a low temperature to retain flavor, where Caol Ila has a hotter, faster distillation, sort of cooking off some of its smoky character. I assume they are both correct, and the combination of those two differences in process is what gives the two whiskies their individual styles. 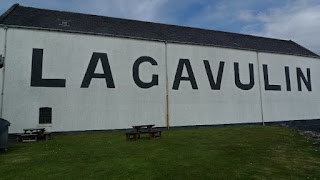 As expected we were banned from photography during the tour, although I did manage to get a shot of the stills through an open door while wandering around outside later in the day. 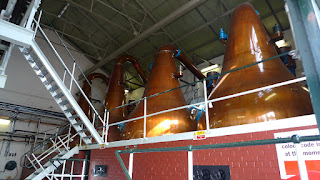 But the real treat came after the standard tour, when we took the warehouse demo tour with Iain McArthur. This is the real deal, an employee here for 42 years who started off painting the ends of the casks at the age of 15, and he has done nearly every job at Lagavulin. He is a walking, talking history book. No question is too tough, and every answer is honest, not to mention his great sense of humor and wonderful character. Iain leads this tasting demonstration which starts with new make spirit, and goes through samples drawn directly from four casks, progressing in through a range of ages and barrel types. 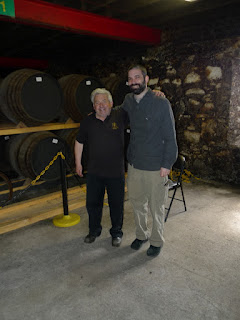 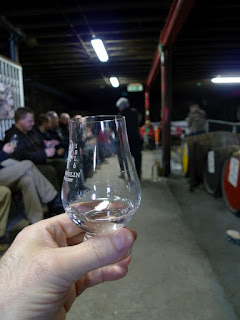 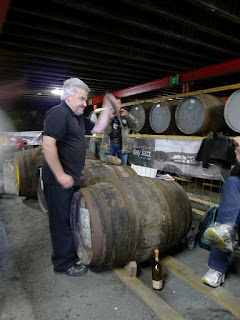 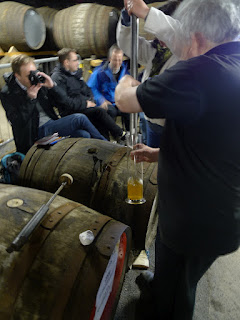 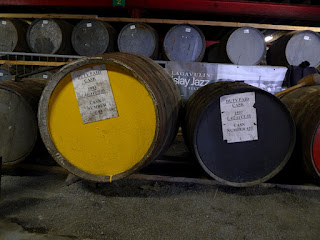 46yr, abv not specified but claimed to be over 40%, bourbon barrel, fill # unknown. Wonderful mild palate, smooth and easy to drink, very little smoke left at this age, turns too woody on the finish. According to Iain, if they were to bottle this whisky, it would retail between £2000 and £3000 per bottle! 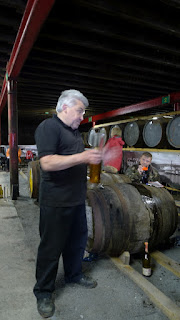 From there, we made are way down the road to Ardbeg, where we had lunch at the Old Kiln Café, which is in their old malt building (outstanding food by the way). Next up was the Old Ardbeg / New Ardbeg Tour.

Ardbeg was shut down in 1981 for what they thought would just be a few weeks at the time. This turned into a long term closing, and the distillery was almost lost forever, but it did come back with limited production from 1989-1996. In 1997 Hiram Walker sold the distillery to Glenmorangie, who restarted production and went to full production a year later. With a long period of no distilling followed by years of minimal activity, they had some huge gaps in the age of their stocks. Because of this, they have had various bottlings run out, and new variations of Ardbeg have replaced them over the recent years. This tour provides a tasting that explores the new varieties versus the lost ones, a rare opportunity indeed. 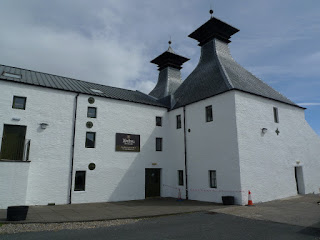 The tour started off in a former malt building, with a taste of the 17 year, which was an Ardbeg icon before it vanished. The company had found a forgotten surplus of 17yr miniatures that they chose to use for this tour’s tastings.

From here we ran through the typical distillery tour, exploring the various parts of the operation. And finally, we were on a tour where photography was allowed. Distillery photos abound! 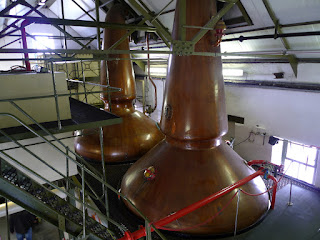 At the end we were taken to a tasting room where the rest of the sampling took place. We tried an interesting mix of cask samples, current bottlings, and two more “no longer available” bottlings, one from another stash of rediscovered minis. 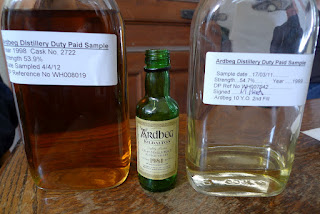 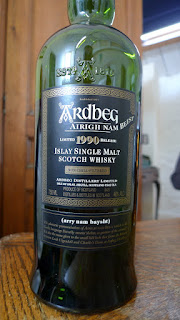 Next we were given a choice of current bottlings – Corryvreckan (aged in new toasted French oak) or Alligator (aged in a mix of bourbon barrels and new American oak with a #4 char). I went with the latter, since I have a bottle of the former at home. 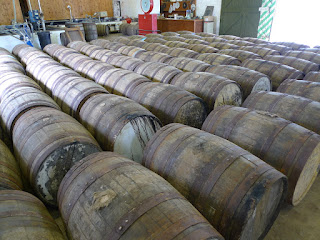 Alligator (no age statement, claimed to be a mix of 10yr to 12yr) 51.2%. Mild nose, sweet vanilla and caramel flavors followed by strong peat which builds in intensity through the long finish.

That was the end of the tasting, but a few guys that were lingering around at the end convinced the guide to give us a small sample of the Blasda, their current mildly peated offering. I didn’t take tasting notes at the time (my palate was pretty much fried by that point anyway). However, I do remember it being enjoyable but not nearly as special as the Kildalton. 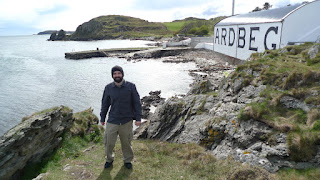 This was a really good tour, with the chance to taste whiskies that are now almost impossible to obtain. But I think it could have been better if it had been structured a little differently. We worked through a lot of samples fairly rapidly at the end, and the order in which we tasted them didn’t make much sense. When I do big tastings, I find it best to start with lower proof and less flavor intensity (peat levels in this case), and work your way up. I think this tour would be improved by spreading out the tastings and changing their order. Maybe start in the old malt room with Blasda followed by Kildalton, then tour most of the distillery, and go up to the tasting room for the 17yr, followed by Airigh Nam Beist (which is unavailable now, but was introduced around the time supplies of the 17 tapered off), then follow that with a choice of Alligator or Corryvreckan. At the end, down to the warehouse / cask filling room for a short talk about the work that goes on there, followed by the two cask samples.

After dinner, I somehow managed to wander over to the local pub for one last drink. I tried the Bruichladdich First Growth Cuvee C: Margaux (Chateau Margaux) 16yr. This was a very nice way to finish the day after endlessly bombarding myself with peat monsters.
Posted by VT Mike at 5:20 PM