I stretched myself a bit and really made the most of the first day in Scotland after a sleepless night of flying, the highlight of which was a free sample of Ardbeg in London Heathrow during my 3 hour layover. As I marched toward my connecting gate, I was drawn over to the table from 20 ft away by the smell alone, and much to my delight they had a choice of 10yr, Uigeadail or Corryvreckan. “Uigeadail? Yes please. Thank you. I’ll be at the distillery in a few days”.

If you can navigate the tangle of roads in Glasgow, Auchentoshan Distillery is only 15 minutes from the airport. It took me a bit longer, even with GPS. But I got there eventually. As luck would have it, it was open house weekend: free tours all around. I was a bit knackered from the travel, so I think some facts went in one ear and out the other, but it was an interesting and informative tour nonetheless. 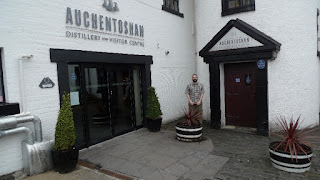 The tour ended in a lovely tasting room, with two drams on offer. The first was their flagship Classic (I think the tour guide said the age range in the Classic was typically 7yr to 9yr and it was aged exclusively in bourbon barrels). Auchentoshan is one of only three remaining lowland distillers, and the only one to continue the lowland tradition of triple distillation, so this dram is rather light and easy drinking by nature. Next up was a bottling from their Travel Retail range. The web site descriptions gets right to the point of how these are made, but the airport store shelf talkers made the whole line sound like contrived marketing-speak. I’m glad to report the at least the “Heartwood” version was a worthwhile whisky, with a lot more weight and flavor development than the Classic. 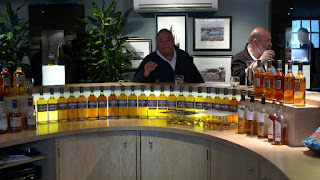 From there we made a slight detour out to the Glengoyne distillery. It is just outside Glasgow, but technically it falls into the area designated as the Highlands. We loitered around the distillery shop trying to decide if we wanted to wait 30 minutes for the next tour. The wonderful women working there poured us a small sample of the flagship 10yr, and after chatting with us for a good bit offered a taste of a special bottling called the Teapot Dram. This special edition of 3105 bottles came from 5 first fill Sherry butts married together (3 9yr American oak, 1 13yr American oak, and 1 14 year European Oak), that was enough to convince me to take the tour – my father opted for a nap in the car this time around. 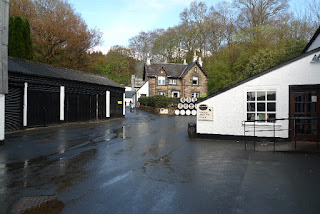 The tour started in the tasting room, with a proper pour of the 10yr and a short video, then, it proceeded through the distillery. More extensive tasting options were available, but I still had a few hours of driving to do, so I picked up a miniature of the 21yr instead. The 10yr is nice, but its very prominent fruit flavors dominate a little too much for my preference. I think with more age and heavier sherry influence, it becomes a much better balanced whisky. I’m basing this on past tastings of the 17yr, and the lovely Teapot Dram that was bottled at 58.8% abv. I’m kind of regretting not spending the £50 on a bottle. This was another informative tour, during which I learned that many steps are taken throughout production to maximize the spirit’s contact with copper, giving it the strong fruit flavors that are characteristic. 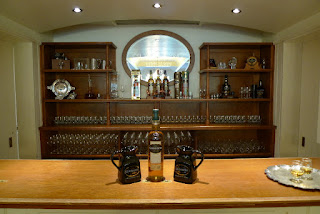 The best part of the day was seeing the still setups and comparing the different methods used by these two distilleries. Auchentoshan gets its light style through triple distillation, and looking at the three stills, the second is smaller than the first. This makes sense, there is less liquid as you move through the process and the alcohol becomes concentrated. It stood to reason that the third still would be smaller yet, but it wasn’t, it was sized between the first and second. I asked the tour guide about this and was told that the third still would be too small, and not as fuel efficient at that size. So they made it bigger and they run two batches through the first two stills and combine them in the upsized third still before it gets fired up. 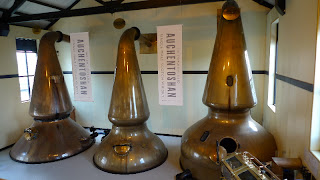 At Glengoyne they have a very different philosophy. They double distill, but have three stills. All of the liquid runs through the first still, then, it is split into too even smaller batches which are run through two smaller but identical second stills. This is done do increase the ratio of copper surface area to liquid (and gaseous) spirit in the second distillation, adding more of the fruit flavors that they are after. 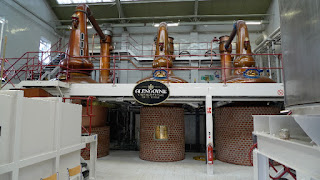 After a long drive to Oban, we took a nap, went out to dinner and ended with a nightcap at Cuan Mor, a local bar with a respectable single malt collection. The highlight there was the Cragganmore Distiller’s Edition. It started off with a dry malty nose, followed by malt, biscuit and cocoa (all in a dry way) on the palate, and wound up with a smooth, warming finish. None of the floral notes that turn me away from the 12yr bottling were evident.
Posted by VT Mike at 4:44 AM