Even after yesterday’s mega-tasting, we still pushed on to visit three more distilleries today, all on the northern part of the island.

First off was Bunnahabhain, where we were scheduled for a 10:30 tasting tour. This is a quirky, out of the way distillery. For many years it was owned by a large conglomerate and kind of ignored, only able to put out a 12 year old single malt on a regular basis. In 2003 they were sold (along with the Black Bottle blend) to a much smaller company, which also owns Tobermory and Deanston. Production has gone up, the standard lineup has had an 18yr and a 25yr added to the 12yr, and many other limited edition releases have made their way to market. Two years ago they stopped chill filtering, and raised the proof of the 12yr, 18yr, and 25yr from 43% abv to 46.3% abv.

Most of what they make is minimally peated, around 2ppm, but they do make spirit from heavily peated (15 to 25 ppm) malt for a few weeks at the end of the year before all of the equipment gets an annual clean out. 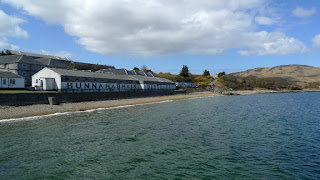 The tour was fairly standard, photography was allowed, just no flashes. The biggest thing that stood out was the size of the mash tun, which was bigger than the new one at Caol Ila, where they have almost triple the capacity. The mash runs much longer at Bunnahabhain than most other distilleries, I think around 10 or 12 hours, where most of the rest seem to be about 4 to 6 hours. They also add water to the mash is 4 stages here, when everyone else does just 3. I’m guessing this is done do maximize efficiency and get every drop of starch and sugar out of the grain that they can. 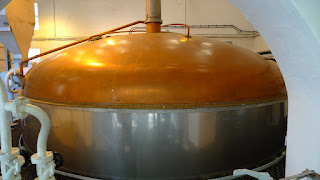 For some reason the 4 stills at Bunnahabhain were quite tarnished, where all the others we have seen practically glowing for the most part. I didn’t want to ask there and offend, so I’m still trying to figure out the reason for that. 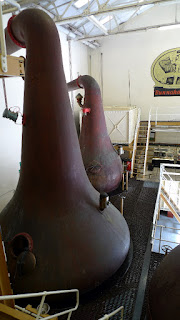 We eventually made our way back to the tasting room, for a run through two from the standard lineup (12 and 18), and two more rare bottlings: Darich Ùr, which is aged in new charred oak, and Toiteach, which is the heavily peated version.

Darich Ùr, no age statement, 46.3% abv. Warm, vanilla and other oak flavors, tastes like something that is half way between bourbon and scotch. It is missing the rich malty flavors that I love in the 12yr.

I have a bottle of 12yr and a bottle of 18yr at home, and plan to do a more complete comparison of the two in the coming months

From here we journeyed down to Bruichladdich. It was bound to happen sooner or later – we had to visit a distillery but forgo the tour. No disrespect to the fine people here, we just got too tight on time and a tour didn’t fit in the schedule. But we did visit their impressive shop and taste a few samples before purchasing some miniatures and 200ml bottles. I’ll write up tasting notes when I try them again at home. The shop had an unbelievable number of bottlings for sale, and many of them were available to be sampled as well. 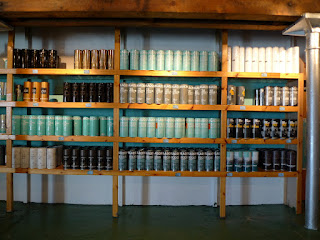 Much like Ardbeg, Bruichladdich was brought back from the brink after a long closure, and they have also had many changes in their product line due to age gaps in the stock. In contrast to Ardbeg, they are big proponents of cask finishing, or Additional Cask Enhancement as they prefer to call it. This is the practice of aging primarily in one type of cask, usually bourbon barrels, then transferring the whisky to another cask (port, sherry, various wines) for a short period of time before bottling. Ardbeg does the opposite, they age in different cask types, but the whisky stays in one cask from start to finish. Then whisky from various cask types is vatted together to get the desired flavor. I don’t think there is anything wrong with either of these methods; they are just going by different philosophies to produce great end products. 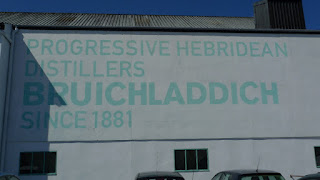 In spite of missing the tour, it was still fun to wonder around outside the distillery and take photos of the many different, very specific cask types they had out there. 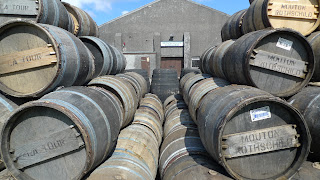 Finally, we made our way down the road a few miles to Islay’s newest distillery, Kilchoman, which began distilling at the end of 2005. Lunch from their café was excellent. 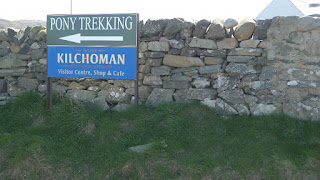 This distillery was started with the purchase of land and a few old farm buildings. Barley was planted, roofs repaired, and new distilling equipment installed. The intention here is to be a small scale farm distillery and do everything in-house, including malting and bottling. But even with a maximum capacity of just over 100,000 liters of spirit per year, they can still only produce 30% of the malted barley they need (this is moderately peated). The rest comes from an outside source (and is heavily peated). But they do keep the liquid produced from the two different malted barley sources separate, so you can know which you are buying a bottle of. 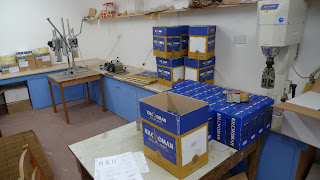 This tour wasn’t too different from the others, but it was very interesting to see everything being done on such a small scale relative to the other distilleries. 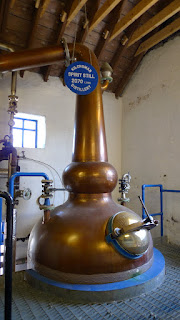 They have been doing limited releases of quite young whisky for a few years now, managing to generate revenue and interest in the brand. Many of these have been surprisingly good for their young ages. Tastings included in the tour were Machir Bay and 100% Islay. I picked up several miniatures here and will put together full tasting notes at home eventually. 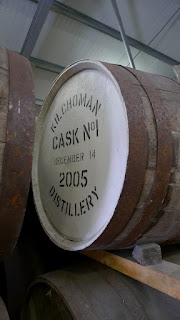 I made one last stop on the way back to home base – Duffie’s Bar in the Lochside Hotel in the town of Bowmore. I had heard they have 300 single malts, that is impressive anywhere. When I got there and looked at the list I realized they had 300 Islay single malts. That is Crazy. I was hoping that the 25yr Bunnahabhain would be part of the tasting tour I did in the morning, but no such luck. I thought I might try it at a bar, but at £25 for a drink, and considering the minimal difference between the 12yr and the 18yr, I decided my money would be better spent in other ways. So I dropped down the price scale to £10.50 (which seems cheap when you look at the rest of the list) and tried a Bunnahabhain 16yr Manzanilla Sherry Wood Finish. A lovely dram enjoyed in a spectacular location. 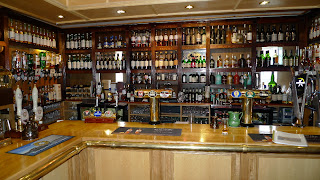