We had a long travel day today, but still managed to squeeze in some whisky activities. An early drive across Mull put us on the first ferry off the island. After bumbling about Oban in search of a petrol station, we finally started the drive south toward the Kennacraig ferry terminal. Half way there, we whittled away a spare hour with a stop at Kilmartin to check out some carved stone relics and a museum dedicated to the area’s rich ancient history. 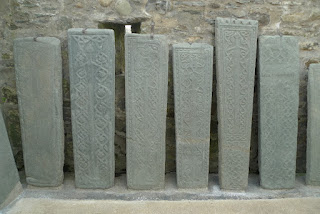 We arrived for the 1:00 ferry to Islay with perfect timing. The 2 hour ferry ride was pleasant all along, but the last 30 minutes through the Sound of Islay provided stunning views of both Islay and Jura. 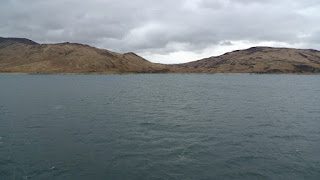 I took my first dram of the day on the ferry, sampling the Black Bottle blend, which is heavily peated, containing many island malts. I’ve read about it and wanted to try it, but never had the chance at home. In this part of the world, it’s hard to find a place without it. I even had time for tasting notes: mild nose with an odd note that I can’t place. Smooth up front, then moves into moderate peat levels on the palate. It builds a bit before turning warm on the smooth finish. Probably the most heavily peated blend I’ve had, but still quite easy drinking. 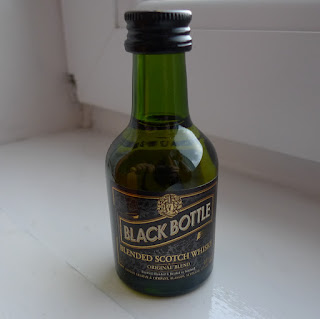 Finally, we landed on Islay (please pronounce it correctly – eye-luh). This is it, the dream destination of all lovers of heavily peated single malt, the Mecca to which they must make a pilgrimage. Straight from the ferry, we made the short drive to Caol Ila and caught the 3:30 tour. Caol Ila is owned a large conglomerate named Diageo (they also hold Oban and Lagavulin in their portfolio of 20-something distilleries. And “no photography” during a tour seems to be corporate policy. Oh well. 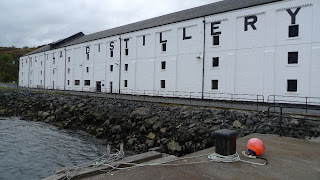 This is the company’s workhorse distillery, with a massive capacity of nearly 6.5 million liters of spirit able to come off the stills each year and 95% of production going to blends. They just reopened after a 6 month shutdown for improvements, adding a massive new mash tun and two new washbacks complimenting the original 8. This upgrade is likely pushing the 6 enormous stills to nearly maximum capacity. 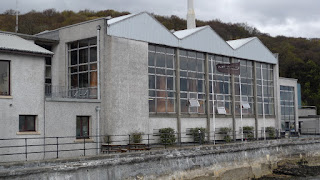 Now the interesting tech bits – most single malts are double distilled. The first (wash) still brings the alcohol level up a bit, and the second (spirit) still finishes the job. But whisky is only made from the “middle cut” of liquid from the spirit still, not the stuff that comes outl first (foreshots) and last (feints). But that liquid is collected and put through the spirit still with the next batch.

During the tour, it was claimed that Caol Ila tastes less peaty than Lagavulin, even though their malt is peated to the same level. This is because Caol Ila takes a tighter cut (less liquid from the center portion of what comes out of the second still), causing less of the heavier peat notes to be carried over.

Also we learned that the feints and foreshots being carried over to the next distillation is very important to the flavor of the whisky - so much so that when Caol Ila closed for repairs and upgrades, that extra liquid from the last batch was collected, pumped into a tanker truck, and sat in front of the building for 6 months until the work was done and it could be added to the next batch through the stills.

At the end of the tour two drams were offered from a selection of three – the standard 12yr (which comes from 2nd fill bourbon barrels), Moch (a “no age statement” bottling from bourbon barrels picked specifically for their flavor profile), and a cask strength that is only sold in the distillery shop and is made from a mix of American and European oak. We asked about the unpeated 12 year that they were selling (which hasn’t been made for 7 years), and an open bottle appeared for us to sample. The shop also sold the standard 18yr, 25yr, Cask Strength (from all bourbon barrels) and the Distiller’s Edition (finished in Moscatel casks).

After dinner I did manage to walk over to the local pub in the Ardview Inn, which has an amazing selection of hard to find Islay malts. I took it easy on the first night, just sampling the 15yr Bruichladdich and a 16yr Isle of Jura from Murray MacDavid which was distilled in 1992 and finished in sherry casks after starting in bourbon barrels. 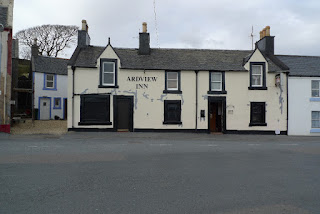