I only planned one full day and two overnights on Mull since it has but one distillery. Now that I’m here, I’ve fallen in love with the island and could easily spend a week here alone. After the traditional full Scottish breakfast, we made our way down to Tobermory distillery for an 11:00 tour. For a brief history of the distillery, see the third paragraph of my G&M Ledaig post.

Right in the heart of town, the distillery is a large triangle of connected buildings with a courtyard in the center. We started with a short video in the little tasting room which is connected to the distillery shop. The first question I asked was if the malt for the Tobermory single malt was slightly peated. The tour guide told me it is not, but the water they use does run through peat and picks up some of its flavor, giving the final product a subtle peat note. She said some can taste it, others don’t pick it up. Nice to know I was on point with the tasting notes I made last night. 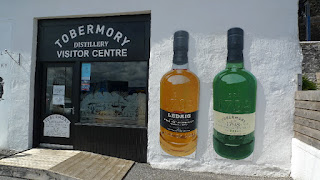 As we moved into the distillery, we were again told no photography. Hopefully this trend doesn’t continue. The tours all follow the same basic pattern of grist mill – mash tun – wash backs (fermenters) – stills & spirit safe. But as you go along and ask a few politely prying questions, some interesting details usually emerge. The one that got my attention here was that they run a much longer fermentation for the peated Ledaig than the unpeated Tobermory. The former running close to four days, and the latter going about two days. We also learned that most of the aging is done in former bourbon barrels (I think exclusively for the Ledaig 10yr and the Tobermory 10yr), but the Tobermory 15yr spends 14 years in bourbon barrels, and is then transferred to sherry barrels for one year. (I’m not sure if I was misinformed by the tour guide or simply misunderstood her, but I have since learned that the 15 year is aged exclusively in Oloroso Sherry casks which spend 14 years on the mainland before coming back to Mull for a final year of maturation.) 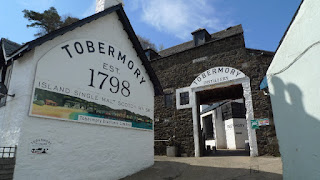 Toward the end, we learned that in the late 1980’s, the distillery was close to going bankrupt after being mothballed since the mid 1970’s. When it was bought, the new owner had to raise capital to get it going again. They chose to sell of the warehouse building across the street to a real estate developer who turned it into apartments. 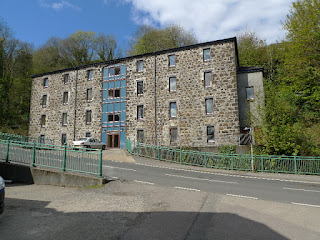 The whiskey is now aged in the warehouses of Bunnahabhain, on Islay, who are owned by the same parent company. They do still have a tiny warehouse space on site where we got to see something special. They have several barrels (sherry butts I believe) of Ledaig from 1972 that will be bottled later this year as a 40yr, probably selling for upwards of £1000 a bottle. A few years ago they did a similar release of a 32yr Tobermory, with just 902 bottles released, it sold for about £200 a bottle.

Finally back to the tasting room for a dram, we were given a choice of either 10yr. I went with the Ledaig, a well made heavy hitter of peaty island character. I picked up a miniature to take home, detailed tasting notes to follow. 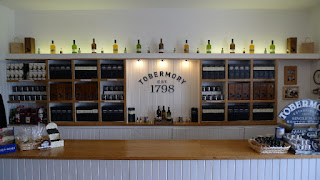 We spent the afternoon on a long driving tour of the island – glorious tight twisting single track roads surrounded by stunning scenery. I could ride my bicycle here for days on end. 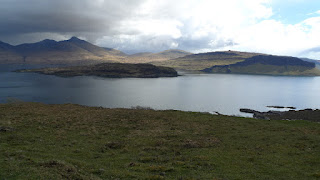 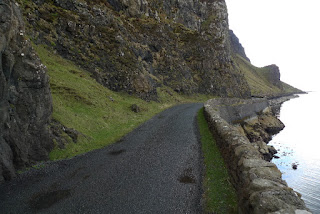 After dinner I opted for a 15yr Tobermory for dessert, and took notes. Rich candied fruit nose, same heavy body as the 10yr, but a little deeper, darker and more richness on the palate, with fruit and spice notes emerging later, and the spice notes eventually taking over on the finish. The finish is slightly delicate compared to the 10yr. It evolves well, showing nice complexity.

After dinner we popped into the Aros Lounge (the pub in a hotel on the waterfront with close to 100 single malts) for a few drinks. No tasting notes as we were enjoying a chat with a few of the locals, but I did try a Tomatin 12yr and an Old Pulteney 12yr. 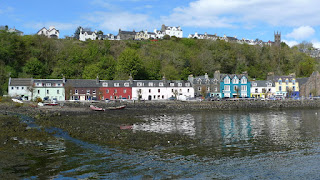 I had noticed floor to ceiling windows facing the street in the still room during the tour, and was told that they ran a night shift at the distillery, so I went back after dark to get a picture of the stills when they could be seen from the outside. I’m persistent, what can I say? 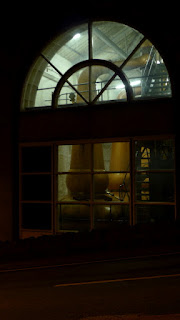