Now I have reached the fundamental heart of my journey. The seed for which, once planted, germinated and grew into a global quest. Whisky School. And with the idea to attend in my head, I was set on an irreversible path. If one is to engage in such an endeavor, there is no better place in the world to do it than the Springbank distillery. 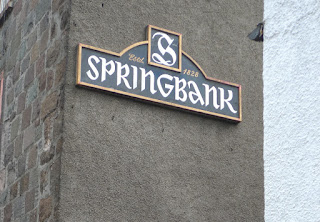 Springbank has long held special place in my heart. The 10yr is the single malt that opened my eyes to single malts. Prior to that, the only scotch I had tasted was Dewar’s White Label (which I detest to this day), and sadly I made the assumption that all scotch tasted similar to this. Luckily, a bottle of Springbank fell into my possession about 7 years ago. Ahhh, redemption!

Since then I have come to know many things about Springbank that have furthered my respect for and fascination with the brand. Things are done the old fashioned way here, by hand, with equipment that many would consider relics. It can be labor intensive and inefficient at times, but a lot of love and dedication goes into every bottle. This is one of only about half a dozen distilleries where they malt their own barley on a traditional floor malting, and the only one that malts 100% of what they use in-house. It is one of a very small number with its own bottling line. They have three distinctively different versions: Hazelburn, which is unpeated and triple distilled, Springbank, which is lightly peated and distilled 2 ½ times, and Longrow, which is heavily peated and double distilled. All of their casks are aged in their own warehouses on-site, and they have never chill filtered or added caramel coloring. 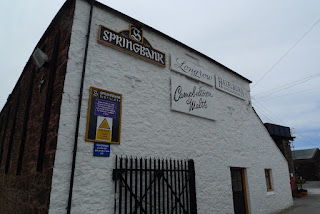 This is sort of the ultimate distillery tour. Five days long and limited to 6 people, with the opportunity to work side by side with the employees, actually performing most of the tasks that are involved in the process. There is a mix of hands-on learning and classroom time. No question goes unanswered, and there are no restrictions on photography.

The group of 6 was split into pairs for some parts of the process, and not every part happens every day, so the process may not all be covered in the order that it occurs.

We started at the two outside grain hoppers, which hold the raw barley that is delivered once a week (only from Scottish sources, none of it comes from elsewhere in the European Union. 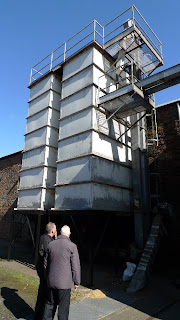 From there, the barley travels up shoots to a large bin on an upper floor where water is added and it steeps, starting the germination process. 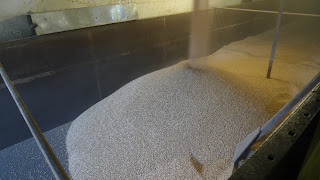 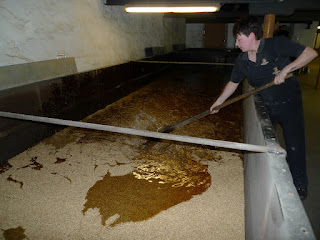 Most of the mechanical devices here are run by a single electric motor, and driven by a series of belts, pulleys and drive shafts that run throughout the buildings; very old school. 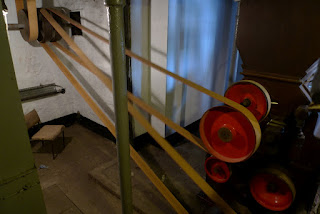 After steeping for several days, the water is drained off, and the barley is spread across a concrete floor for 6 days. Temperature is controlled by opening windows in the summer and making a deeper bed of barley in the winter (heat is generated in the barley during this step). Getting the barley to the correct temperature and moisture content causes it to germinate, which converts insoluble starches into soluble starches and develops enzymes that will be crucial later on. As the barley germinates, it needs to be worked, both for aeration and to keep moisture levels consistent throughout the depth. This also keeps that barley from clumping together and from sticking to the floor. 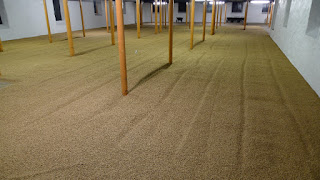 Two tools are employed for this task: a turner, and grubber. The turner is electric and uses a paddle wheel to spray out the barley, keeping the pieces separated. The grubber is dragged through the bed of barley, scraping the floor as you go to keep anything from sticking. Grubbing is pretty easy, but you do have to hold the handle low enough or it won’t dig through to the floor. The turner is more challenging, it’s heavy but if you lower the handle just enough, the paddle wheel will cause it to self-propel. Keep it in a straight line, mind the cord, watch out for the columns! 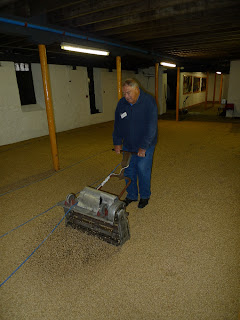 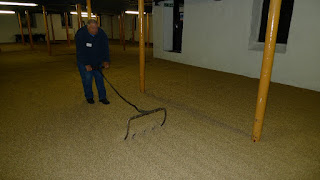 After 5 or 6 days, this process must be stopped, or you end up with millions of little plants that you can’t make whisky with – “and then you get the sack” our instructor tells us.

This is done by drying the barley in a kiln. Hot, dry air is blown through the barley for up to 48 hours. During this process, peat can be burned as well (which was the traditional method of heating the kilns), adding its smoke into the kiln and infusing that flavor into the barley. The number of hours that peat smoke is added to the kiln will determine how smokey the spirit made from this barley is. 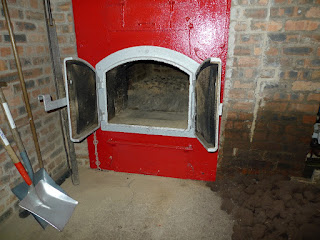 From here, the barley goes through the mill where it is crushed by rollers into grist (the ideal composition of the grist is 70% grits, 20% husk and 10% flour). Most of the mills you see are from a company called Porteous. By the look of the mills, I think the company put itself out of business by making products that last forever. 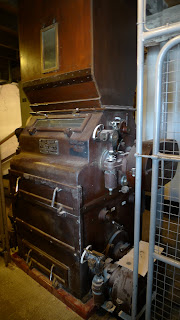 Of course we had to end the day at the Ardshiel again. Too much socializing for proper tasting notes, but I did sample 8yr cask strength Hazelburn, 12yr Hazelburn, and 10yr 100 proof Longrow.
Posted by VT Mike at 2:59 PM