I think I expounded on the inner workings of the Springbank distillery during my time there (starting here) to the point of leaving nothing to discuss for this post. But fear not, another burning topic will lend itself to this tasting quite well.

Over the years of comparing various whiskies, I’ve noticed that many times different age variants of the same whisky can have very little difference in their flavor profiles. I think this first came to my attention five years ago, with 12yr Chivas Regal and their 18yr old. Slightly less smoke and slightly more oak was all that really stood out to me. All of that for a fairly significant jump in price (not to mention that I kind of preferred the 12yr). Around the same time I compared 10yr and 18yr Glenmorangie, and found them very similar.

But I’ve recently seen this trend reversing, and current releases of 18yr Glenmorangie taste quite distinctive compared to the 10yr. I suspect that many consumers grew wise to the fact that a considerable increase in age, along with a much bigger price tag, often didn’t correspond to very much of a difference on the palate. And I’m guessing that many distillers, eager to drive sales of their more expensive offerings, realized that they had to take extra steps to make their older bottlings taste more unique.

Bottling the different ages at different proofs is one quick and easy way to achieve this. Chill filtering the entry level offering and going unfiltered on the older examples would also do the trick. For distillers that use a combination of bourbon and sherry casks, varying the percentages in the mix seems like it is becoming more common, usually with the amount of sherry cask whisky in the vatting increasing as you progress through the age range. Some prime examples of the last technique would be Tobermory 10yr and 15yr, Glengoyne 10yr and 17yr, and An Cnoc 12yr and 16yr (in this case the younger of the two sees more sherry wood). Another method is to simply utilize cask management / selection. The distillery manager will pick casks with a certain flavor profile for the flagship age, and hold back casks that taste different / better for further maturation.

So, how do the two Springbanks compare?

10yr
light golden amber in color.
fruit and mild peat on the nose.
amazingly full flavored, with plenty of fruit (apple and orange), followed by a hint of vanilla and brine. as the fruit fades, dry oak spice and gentle, but firm peat smoke take up the slack. wonderful complexity and a long, enduring finish. a true classic.

15yr
very close to the 10yr in color, just a touch darker.
the nose is more restrained, with dry oak spice notes leading the way.
there’s plenty of flavor here as well, but the fruit is less bright, more along the lines of dark and baked fruits (apple pie, etc). the oak spice is drier and warmer (cinnamon spice). the brine and peat smoke are still present, but toned town quite a bit. the finish is also lengthy, but much drier. 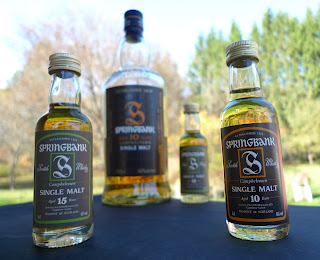 I think the folks at Springbank have done a nice job of making some differentiation between these two expressions without taking it too far. They aren’t radically different from each other, but still distinctive enough so that consumers wouldn’t feel like they wasted their money on the 15 year. I have to admit that, even though I’d be happy to drink either one, I do like the 10 year a little more. I would put that down to personal preference though.

I’m guessing that there is slightly more sherry aged whisky in the 15, and possibly some cask selection leaning toward a drier profile. Unfortunately, one thing I missed at whisky school was the process for selecting the group of casks that would be vatted together before bottling. Given the opportunity, I’d be sure to explore this topic further.
Posted by VT Mike at 2:20 PM