When I went on the tasting tour of the Bunnahabhain (pronounced boona-ha-ven) distillery back in April I sampled both the 12 year and the 18 year. They seemed quite similar but I had them one after the other rather than side by side, which makes it harder to compare. At the time, I also tasted a new-oak aged Bunnahabhain and a heavily peated expression. Each of those was different enough to make the 12 and the 18 seem identical by comparison.

In light of the Springbank 10yr / 15yr comparison I did last week, it makes sense to revisit the Bunnahabhain 12yr and 18yr and see how they measure up to each other. On a side note, I was perusing the Springbank website a few days ago, and noticed that they actually give some composition information for the various expressions. The 10yr is 60% bourbon / 40% sherry matured and the 15yr is aged 100% in sherry casks (they are a little vague with the 18yr listing it simply as bourbon/sherry, and strangely more specific with the 12yr cask strength’s description of 60% fresh sherry hogsheads / 40% refill sherry butts). 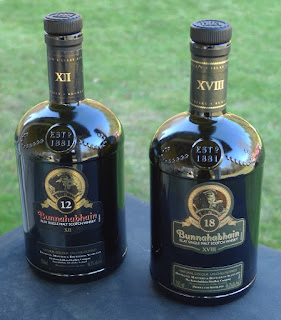 Before the tasting, a little Bunnahabhain history is in order. The distillery was established in 1881, and in 1887 a merger led to Bunnahabhain being owned by the newly formed Highland Distilleries Company Limited. In 1999, the Edrington group took over Highland Distillers and Bunnahabhain entered a period of relative neglect, with the company paying much more attention to the higher profile distilleries in its portfolio. In 2003, Edrington sold the distillery to Burn Stewart, owners of Tobermory and Deanston, and a much needed revival began.

For much of its history, the only regularly available official distillery bottling was the 12 year old, and occasional special releases would be put out on a limited edition basis. In 2005 the standard line was extended to include the 18 year and a 25 year. In 2010, all three expressions were raised from 43% abv to 46.3% and all chill filtration was eliminated.

18yr
very close in color to the 12yr, maybe just a hint darker.
similar nose, but much less malty richness
on the palate, the malty sweetness is quite toned down, with the butterscotch edged out by toasty oak notes
the finish is equally long, but noticeably drier, with gentle spice notes lingering on for some time

The 12yr possesses a beguiling juxtaposition of flavors, while the 18yr comes across as being more subtle and refined. The difference between these two is more significant than I had originally thought, probably close to the degree of difference I saw between the 10yr and 15yr Springbank last week. I’m actually quite enchanted by each of them, but for an everyday drinker, the 12 year is much more attractively priced. Looks like I may have to hunt down a sample of the 25yr Bunnahabhain after all.

It’s interesting to note that I did taste the 12 year Bunnahabhain that was at 43% abv several years ago, and it was much lighter (body and flavor), and less malty but more floral on the palate, if I recall correctly. I was a little suspect of that bottle as I knew it had been opened and partially consumed for several years, but I now have a feeling that chill filtering had stripped out much of its character.

The 8yr Bunnahabhain from Gordon & Macphail that I wrote about back in March is much more dramatically different compared to the current 12 year than the 12 and 18 are compared to each other. None of the three is chill filtered, so I guess the dissimilarity comes down to age, proof and cask selection. 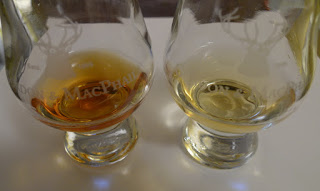