In my Springbank 10yr vs. 15yr and my Bunnahabhain 12yr vs. 18yr posts I focused on examining the efforts that distillers make to create more difference in flavor between whiskies in their core ranges with different age statements. As I mentioned previously, I’ve experienced scotches which taste very similar even when one has been aged 50% (or more) longer than its sibling.

In the example of the two Springbanks, as well as that of the two Bunnahabhains, I’d say the difference was moderate. While being enough to set the two expressions apart in each case, it wasn’t so much that they seemed like entirely different whiskies.

Glengoyne is a good example of a single malt where this differentiation between the various ages is taken quite a bit further. I had tasted the 17 year for the first time a few months before going to Scotland, and I liked it enough that I was pretty excited to visit this distillery that I actually knew very little about. The distillery tour started with a short video and a healthy dose of the 10 year. Much to my surprise it was significantly different than the 17 – a lot lighter in color and considerably more fruit forward, especially bright tree fruits like apple and pear.

I think (I was pretty sleep deprived at the time) the tour guide said that all of the Glengoynes had “some” sherry cask whisky in them. I asked what the percentage of sherry cask whisky in the 10 year was, but couldn’t get a straight answer. I suspect that it has very little, if any content that has seen time in sherried oak. It’s obvious from the taste and color that the 17 year that there’s a much higher proportion of sherry aged malt in it. If I had to make an educated guess, I’d say 60%.

Thankfully, the distillery shop at Glengoyne had a good selection of miniatures, so I was able to bring back a 17yr and a 21yr in addition to the 700 ml Teapot Dram bottling I came away with.

I noticed that the label on the 21 year has “sherry matured” printed on it, which is absent from the labels of the younger bottlings. I’m taking that to mean it is 100% sherry matured. Just looking at the color difference between the two, I’m expecting a big difference in flavor as well. 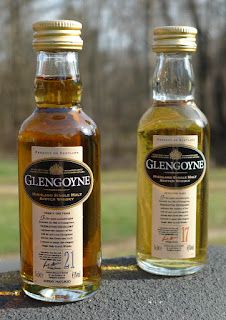 17yr
color - medium golden (between dark chardonnay and light amber)
nose – gentle fruit with subtle floral notes
palate – the signature apple and pear notes are still obvious, but instead of being dominant like in the 10yr, they mingle with more dry oak notes and mild dark fruit
finish – dry spice notes are joined by floral / grassy flavors
It’s been a while since I tasted the 10yr, but I think it may have had some of the same floral qualities. The 17yr really brings this whisky a long way from the 10yr. There is a substantial difference between the two, and the 17yr is much more to my liking.

21yr
color - medium amber brown
nose – fruit with dry oak notes
palate – spice box up front, then a wave of bright tree fruit that quickly gives way to darker baked fruits, there’s still a hint of the floral aspect, but it becomes a quiet background note in this expression.
finish – dry oak spice finish which turns slightly nutty at the very end
nicely balanced, great complexity (cedar, cinnamon and unsweetened cocoa all pop up along the way) right through the long finish.

Of course the jump from the 10yr to the 21yr is striking enough that in a blind tasting many people might not even recognize them as being from the same distillery. I appreciate the variety, and find it interesting to see what sort of magic can happen in the warehouse. But there is the downside that someone could try the younger expression, not like it, and pass up its elders which they could potentially have really liked.
Posted by VT Mike at 5:40 PM