When I was a much younger man, I was in awe of the apparent clairvoyant abilities of Nostradamus. As I grew older and wiser (and significantly more cynical), I came to realize that he was likely nothing more than a charlatan. As far as I know, none of his prophetic writings have ever predicted anything correctly in advance. They are merely retroactive prognostications – cryptic writings which have been interpreted to have predicted events only after said events have transpired. 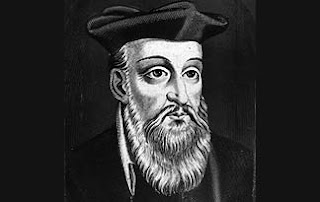 You may be wondering why I’m blathering about a 16th century figure whose story is better left to the History Channel – well, I’m about to go out on a limb and make a bold prediction. Of course my forecast is related to whisky, a subject of which I have some knowledge. And I’m only going to prophesize a year into the future at most – I have no intentions of telling you what people will be drinking in the 25th century.

A little less than a year ago I wrote a blog post comparing Johnnie Walker Black to the new Double Black. A quick look at the stats reveals that this is far and away the most viewed post on the blog - obviously the subject is of great interest. In recent months my father has been lamenting about his inability to locate the Double Black in the greater Boston area. My arrogance got the best of me as I proclaimed that I’d have some for him in no time. A little online research showed not a single bottle in New Hampshire and a stock status of “Unavail (Do not order)” in Vermont.

I think it’s safe to say that Johnnie Walker is having supply issues with their new Double Black. You may remember my post about Bulleit Bourbon from early October, where I analyzed how the brand dealt with a shortage of product around 2008. Since both brands are owned by Diageo, I think we may see some similar actions in response to the current issues.

The Double Black carries no age statement, so it would be easy for them to reformulate the blend with some younger whiskies. I think this is likely to happen, but only to a minimal extent. Considering the great reviews it has received along with the marketing being heavily focused on its flavor profile, they would be playing with fire if they were to alter the way it tastes too drastically.

As for simply adding water to dilute the whisky and stretch existing stocks (like Bulleit did in select markets), the Double Black was already at 40% abv. Since that is the minimum legal strength for Scotch whisky, lowering it further is not an option.

Limiting availability (at least on a continual basis) doesn’t seem to be the way of the scotch industry in general or Diageo in particular, so I don’t think that will be a part of any long term strategy once we get past the current shortage.

That leaves just one last option – a price increase, and I fear it will be a fairly drastic one. Also, when you consider my original opinion of the price versus quality of Double Black and regular Black label, I think the new whisky had the potential to really decimate sales of Walker Black. The easiest way to keep that from happening and not have one expression steal sales from another expression is to vastly widen the price gap between them. Last year you would pay a 10% - 20% premium for Double Black over Black. Whisky prices have been rising rapidly lately, so I’m probably not making too bold of a prediction here, but I really think that by the end of 2013 it will be impossible to find Double Black for less than 50% more than the price of Walker Black.

Interestingly, I wrote most of this post last night and went on a little whisky hunting mission south of Boston before proof-reading and posting – and sure enough, at the third store I stopped by there was the elusive Double Black, at $60 a bottle! I suppose this store could have stumbled across some forgotten inventory and engaged in a bit of price gouging, knowing that no one else in the area has what they have. But I really think that this price is the new normal and will become widespread over the next 6 to 12 months. Time will tell.
Posted by VT Mike at 5:08 PM