The story of Day 14 really begins on the evening of Day 13, with packing and other preparations for the journey home. In spite of hours of online research before the trip, I was never able to come up with a definitive answer to my question of how much alcohol is it “okay” to bring back in my checked luggage?. As far as I could tell there was no limit imposed by the airlines or the federal government (but anything over 140 proof is considered a hazardous material and not allowed on the plane). Of course you can bring back one bottle duty free, I think up to a value of $800. You are supposed to pay duty on additional bottles; however that’s only 3%. I saw references to a federal excise tax, but never saw a rate for that. Then I read that individual states might have limits on how much alcohol can be transported into them – good luck finding that info for wherever you happen to be flying into. I also saw references to the possibility of bringing back too much and raising suspicion that it is for commercial purposes – an annoyingly vague warning. I decided to buy what I wanted, keeping the weight limit of our checked bags in mind, then declare everything and roll the dice with customs. I had heard rumors that they don’t like to bother with all the paperwork unless it is for a small number of high value items, and will often wave people through with their declared items.

Needless to say, my father and I ended up with a lot of Scotch at the end of two weeks. How much? Five 70cl bottles, one 35cl bottle, seven 20cl bottles, and forty-nine miniatures! Much of my last evening in Scotland was spent carefully securing this precious cargo with an assortment of neoprene bottle totes, bubble wrap, packing tape, paper towels and zip-loc bags. Oh, and we acquired 10 glasses along the way at various distillery tours – one more thing to worry about breaking. All of this was carefully spread across 3 checked bags and meticulously integrated into our dirty laundry. Fortunately I had brought my digital hanging scale with me - 2 pieces of luggage ended up within a few pounds of the weight limit and the third had maybe 8 pounds of extra capacity.

The stress of packing and determining the values of items I would be declaring had taken its toll on me - I snuck out of the B&B and scurried across the street to the Fiddler’s Inn for a drink. With two hits of the Longrow 7yr Gaja Barolo and a 10yr Springbank, I managed to liberate my pockets of all the annoying UK coinage I had accumulated over two weeks, and put myself in a happy place before bed.

Day 14 should have been nothing more than breakfast followed by a 2 ½ hour drive to Glasgow, but I had a bit of unfinished business to tend to. I was blaming Day 1 sleep deprivation and the visions of how many rare bottlings I would want to buy during the trip, but I still had regrets about not picking up a bottle of the Glengoyne Teapot Dram when I had the chance, just a few hours after arriving in the country. Well, that could all be rectified with a slight detour on the way to the airport. It only added 30 minutes to the drive after all. The GPS led me back to the bottle I was longing for, and I carefully inserted it into our least heavy piece of luggage. 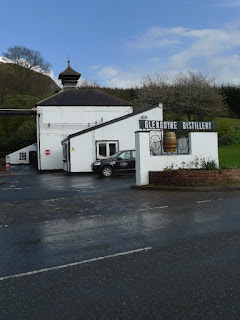 As we chased the sun across the Atlantic, I mentally prepared to explain the copious amount of single malt in my possession to the customs officials at my destination. But that event never came to pass; our flight out of Glasgow was delayed by three hours, causing us to miss our connection in London. We caught a flight to Boston that left two hours after the one we were supposed to be on, but out checked bags didn’t keep up with us. It wasn’t much of an issue getting through customs with our luggage sitting in London. Our liquid hoard was delivered to us 24 hours after we got home. The suitcases looked dry and weren’t emitting any wonderful aromas - yes, everything made it through intact! I had no idea if the customs officials had looked through our luggage and I really didn’t care, I was home and I had my whisky.
Posted by VT Mike at 3:13 AM