The story of distillation turned into a massive post, but there was actually a lot more included in Day 12. I’ve decided to cover the rest of it in this post since there is only a little bit to write about for Day 13.

The afternoon of Day 12 started off with a tour of the Glengyle Distillery, which produces Kilkerran single malt. Owned by J&A Mitchell & Company (the parent company of Springbank), this is one of Scotland’s newest distilleries, having begun production in March 2004. I’ll tell the whole tale of this distillery in the coming months, when I review one of their early releases. As for the tour, it was interesting to see how a modern distillery can be laid out when built from scratch (albeit in an existing building), as opposed to most of the other ones we toured, which have evolved and adapted over hundreds of years. 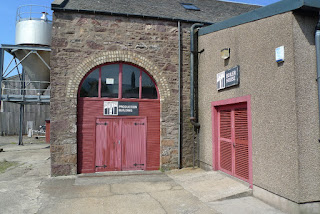 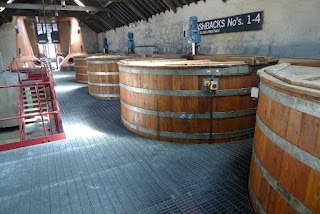 From here we took a walking tour of Campbeltown. Once known as “the whisky capital of the world”, 34 distilleries were built here through the 19th century. Of course, for every boom there is a bust – most of these operations closed down in the 1890’s, and by 1934 only two distilleries remained in Campbeltown; Springbank and Glen Scotia. The remnants of many former distilleries, which are now protected as historical sites, are visible throughout the town. From engraved arches to partial pagodas to stone walls belonging to long ago decommissioned warehouses, these monuments to the town’s whisky history are all about, but easily overlooked without the insight of a well informed guide. 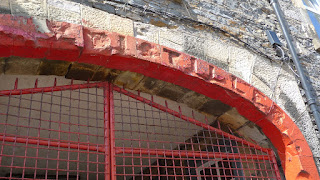 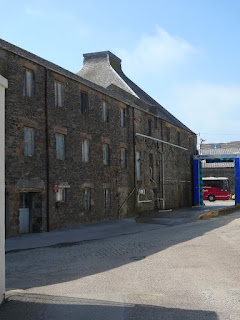 We eventually made our way across town to the Glen Scotia distillery. Springbank and Glen Scotia have no business connection, but the two companies do maintain a very cordial relationship. Started in 1832, Glen Scotia went through silent periods from 1928-1933 and 1984 -1989. After re-opening and operating for 5 years, new ownership took over in 1994 and mothballed the distillery for another 5 years until production resumed in 1999. This was done with staff and technical assistance borrowed from Springbank, until staff was brought over from Loch Lomond distillery in 2000. Glen Scotia, Loch Lomond and the now defunct Littlemill are all owned by the same company. 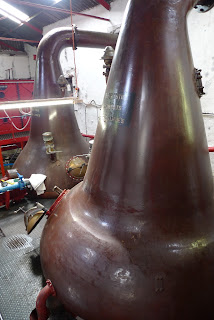 A few years ago I tried the standard 14yr Glen Scotia and was underwhelmed. During our tour, we were told that the folks from Springbank did a lot to slow down the process and improve quality (longer fermentation, slower distillation, etc) at Glen Scotia when they helped out in 1999. These practices have continued since that time, so I’d be happy to give the (now standard) 12yr Glen Scotia a shot if I can be relatively sure that the bottle contained distillate produced after the latest re-opening. 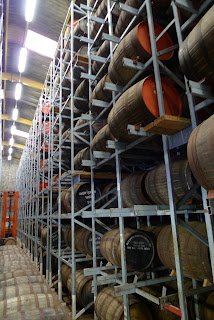 Now for the best part of the day – cask sampling. Off with the padlock and into warehouse No. 3 with the most important of tools in hand: bung extractor, valinch and proper nosing glasses. 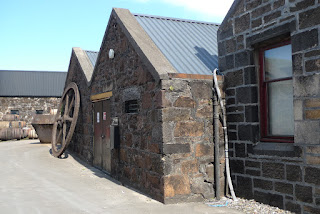 No. 3 is a long, low warehouse, with casks stored one or two high. This is where many of the oddballs end up, so there were a great variety of casks types (shapes and sizes, not to mentions former contents). I scribbled down the best tasting notes I could, but this was really more about enjoying the tasting. 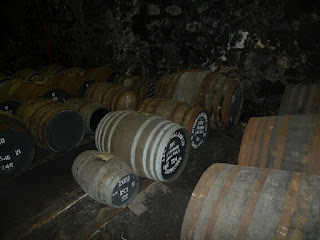 We started off with a Hazelburn at 59.1% abv, from a first fill Bourbon barrel. It was almost 9 ½ years old, having gone into the cask on December 19th of 2002. I picked up pear and apple on the nose, and the palate was light and warm with vanilla and butterscotch notes. 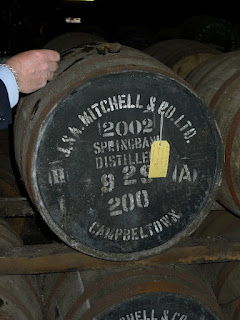 Next up was a Springbank at 57.2% abv. This was distilled in 1997 and aged in a Bourbon barrel until 2007, when it was transferred to its current Madeira cask. It was fruity up front and had the classic Springbank saltiness, with a spicy a finish which was very long.

After that we moved on to something very special. One of the first 6 casks of Kilkerran, filled in March of 2004 when production started at the new Glengyle distillery. Each of the first six is a different type of cask, and bottles from them are being pre-sold at £175 in advance of their release in 2014 once they have aged 10 years. The malt is lightly peated, at 8-10 ppm. Our samples were drawn from the fresh Port cask, and came in at 58.4% abv. It was dark ruby in color and had a nose of licorice and dark, sweet fruit. On the palate there was a big, rich pop of flavor which had a great balance of dark fruit and perfumed floral notes (I’m not usually a big fan of the perfume / floral flavors, but in this case they were subdued enough to add complexity without becoming offensive). I think this was my favorite of the day.

From here we went to a Springbank distilled in 1995. Having been in an Oloroso Sherry cask for about 17 years, it came in at 56.3% abv. The minimal nose was mildly nutty, and the restrained palate consisted of complex dark fruit and caramelized sweetness.

Then it was on to a Sherry cask of Longrow from 1994 (we were told that this would be vatted together with other casks for a bottling of 18yr Longrow later in the year). This was at 53.8% abv. Interestingly, I detected no peat on the nose, instead picking up notes of honey and mineral water. There was a big blast of flavor on the palate with unexpected (and hard to identify) flavors. A solid hit of peat faded fast and mixed with classic sherry fruit flavors, and the honey that was evident on the nose came back on the finish.

Next we drew samples from a Gaja Barolo (red wine from northern Italy) cask. These casks had previously held Longrow Gaja Barolo 7yr (which spent 5 ½ years in Bourbon barrels followed by 1 ½ years in the wine casks). The current contents was Springbank at 58.9% abv, which was distilled in 2004 and had been aged 4 years in refill Bourbon barrels before being transferred to the Gaja casks in 2008. The nose was limited, and the palate combined classic Springbank fruit flavors with hints of red fruits. There was mild peat late on the finish, which was warm and balanced. 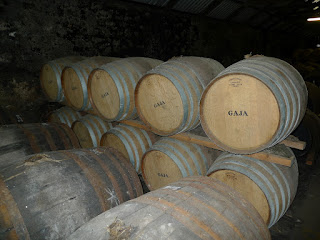 We finished up with a Springbank from 1991, which would become 21 years old in January. It was in a first fill Bourbon barrel and at 53.8% abv. It had a complex fruity, floral nose, and was moderately floral on the palate. Impressive, but not my favorite (of course, I’m sure I was suffering palate fatigue by this point).

On Day 13, we got to sleep in and have a late breakfast before heading to our final exam, which was taken as a group with access to our notes. No one fails, but it was still interesting to see what we had learned and what we missed.

After lunch, we received certificates documenting our successful completion of the course, and we were each awarded a commemorative bottle of Springbank. We were told it was a vatting of whiskies ranging from 10yr to 18yr. It looks fairly dark for its abv of 48.4%, so I’m guessing that it has a heavy dose of Sherry cask whisky in the mix. 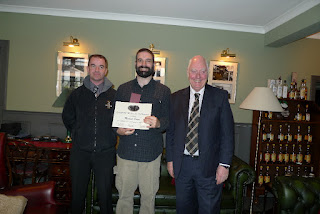 After being photographed with Distillery Manager Gavin McLachlin and Director of Production Frank McHardy, they announced that I had been chosen from the six students as the star pupil of Whisky School. My ability to frequently ask nagging, difficult to answer questions must have put me over the top. For this honor a was awarded a 35cl bottle from my choice of the “living casks” at the Caddenhead’s shop (as whisky is sold out of these, more is periodically added from casks at the distillery, so the abv, range of ages in the mix, previous cask types, etc is constantly changing). I went with the Longrow. 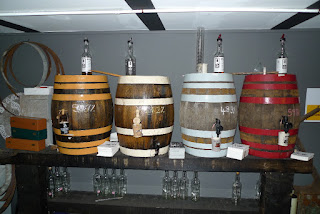 And yes, I did have one final dram at the Ardshiel – a cask strength Royal Lochnager from independent bottler Signatory. I think it was a 17yr from 1991. Quite enjoyable, but much lighter in color and softer in flavor than expected from a full strength Sherry cask whisky.
Posted by VT Mike at 12:44 PM