My pilgrimage to Scotland was the trip of a lifetime. I wanted to make the most of my time there and I really tried to pack a lot into two weeks. Needless to say, plenty of advanced planning was essential. I spent countless hours online, reading reviews of B&B’s and restaurants, researching all the different distillery tours, mapping out my routes, estimating drive times and coordinating with ferry schedules. But once we were there, my efforts were well rewarded. I’m still amazed by how much we were able to see and do in 13 days. At the same time, I think I struck a good balance between always having something interesting to do, and never feeling overloaded with activities or rushed to stay on a schedule.

I was mostly able to stick to my goal of putting up daily blog posts, foregoing sleep for writing time. I think whisky adrenaline and copious amounts of black tea allowed me to get by on 5 hours of sleep a night for much of the vacation. Of course, I could only blog about so much each day, and I skipped over a lot that I would have loved to write about, so a few follow-up posts are in order.

I made the decision to immerse myself fully in the culture, and the culinary arena was a big part of that. I tried to experience as many savory items as I could, starting with local oysters on the ½ shell, on both Mull and Islay. Then it was on to porridge and black pudding with breakfast, and Cullen Skink for lunch (the name sounds more dreadful than it ought to, it’s just smoked haddock chowder). However, all of that is irrelevant if you can’t bring yourself to eat Haggis. Considered the national dish of Scotland, it consists of sheep heart, liver and lungs, minced with onion, oatmeal and suet. This was traditionally cooked in a sheep’s stomach, but most modern Haggis is prepared in a sausage casing. It took me a few days to work myself up to trying it, but when I finally did (stuffed into deep fried mushrooms) I was actually quite fond of it. I also had Haggis in a turnover with tatties and neeps (potato and turnip), but my favorite preparation was the Haggis panini with pickled cabbage served at the Ardbeg distillery’s Old Kiln Café. 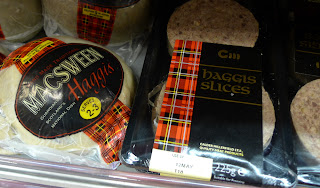 Normally, I would consider it a great sacrilege to do anything with single malt Scotch other than put it in a glass and drink it. But, on my first night in Scotland, I was treated to an appetizer of salmon which had been cured in Oban single malt before being hot smoked. 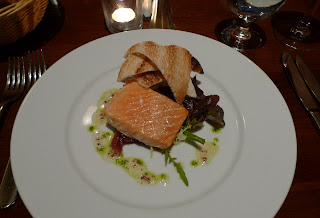 Delicious. After that, I was happy to sample any whisky infused menu item that came my way. In fact, the next night I found myself having a chocolate pot for dessert which was laced with Tobermory single malt – quite delightful. At the Bunnahabhain distillery’s retail shop, I came across a box of Bunnahabhain fudge. The single malt was only 1% of the total ingredients, but it was just enough to add an enchanting dimension to the fudge. As soon as I tasted the first piece, I knew that the box wouldn’t last long enough for any of it to come back to the States. As good as this all was, the pinnacle of whisky foods was Laphroaig marmalade. The home-made specialty of the Cala Sith Guest House, it incorporates a healthy does of Laphroaig 10 yr single malt. Sticky sweet and wondrously smoky, you knew you could only be on Islay the moment you tasted it. I wouldn’t go so far as to say I was hungover on Day 6, but after the extended tasting tours at Lagavulin and Ardbeg the day before, I was definitely a little rough around the edges. Having Laphroaig marmalade on my toast first thing in the morning that day was certainly a shock to the system.
Posted by VT Mike at 3:08 PM