Springbank is one of a very small number of distilleries with its own bottling facility. Today we got to see the inner workings of that operation. Most of the distilleries that produce single malt Scotch Whisky are under the ownership of a larger parent company that owns anywhere from two or three to a few dozen distilleries (many times they own one or more blended Scotch brands as well). Many of these companies have a large, centrally located, and highly automated bottling facility to serve all of their needs.

At Springbank, the bottling facility is small and labor intensive, but quite versatile. They have the ability to switch bottle formats quickly (they regularly use 5cl, 20cl, 35cl, 70cl, 75cl, 100cl, and 150cl,), and can do short runs for special bottlings (limited edition labels, single cask offerings) without too much difficulty. They are equipped to deal with both t-corks and screw tops. Machines are employed, but the process is still very hands on.

This was pretty interesting because we got to see the procedures for dumping whisky from the barrels and how they determine the amount they will need for the number of bottles they want to fill. We also saw how they measure the alcohol level and determine how much water to add to dilute down to the desired bottle strength. I won’t go through all of the details, but it involves the use of dipsticks to check the depth of liquid in various tanks, and checking temperatures and densities (specific gravity) with thermometers and hydrometers. 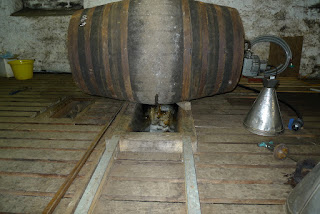 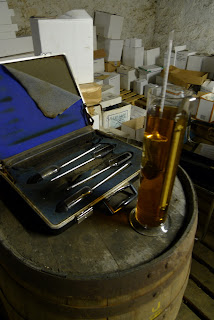 Once the liquid is ready for bottling it is pumped through a filter (not chill filtered, just enough to get out any undesirable bits that came out of the barrel). 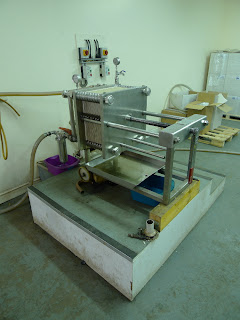 Then the new bottles go on a machine that blows air through them to clear out any dust. 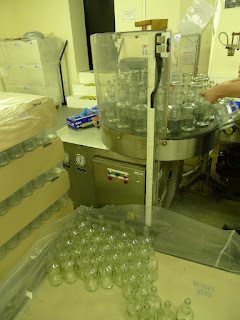 Next they go on the filling station. This must be re-calibrated every time they start a different bottle size. Government regulations allow them a margin of error of plus or minus 0.2ml (as well as plus or minus 0.2% alcohol) 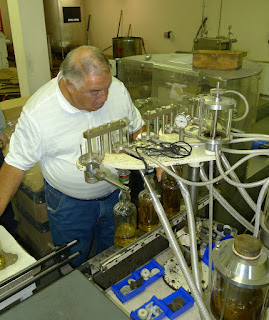 After that the cork is inserted and they move on to the inspection station. Two bottles at a time are held up to a light box for a visual once over, looking for imperfections in the glass or objects in the liquid. They guy who was doing this was incredibly fast, looking at each pair of bottles for less than one second – amazing to watch him go!

Down the line it goes to be put through separate machines for the front and rear labels, after which there is one last visual inspection before the bottles are hand boxed, put in cases, stamped and palletized. Quite an operation. 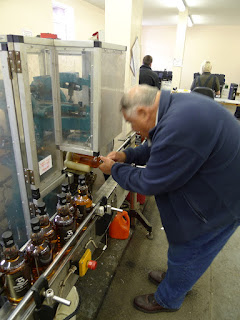 Our post school outing included a bar called Whisky Mack’s. They had less whisky than the name would lead you to believe. I tried the 12yr cask strength Springbank, which has recently replaced the 10yr 100 proof in their lineup. It was very nice, but I think I prefer the latter. We moved down the street for one more at the Ardshiel, where I sampled the 14yr Longrow - wonderful flavor, but incredibly soft and gentle. I may have to hunt down a bottle of this one when I get home.
Posted by VT Mike at 7:10 PM