Today we mostly dealt with the ins and outs of maturation. As I said, we don’t do everything in chronological order because not every step of the process happens every day.

We started with cask filling. The new make spirit is pumped into a large tank in the cask filling room. Then water is added to the tank to dilute the new make down to 63.5% abv. There are no laws in Scotland dictating the proof of the spirit going into the casks; it’s up to each distillery to decide how they would like to do it. 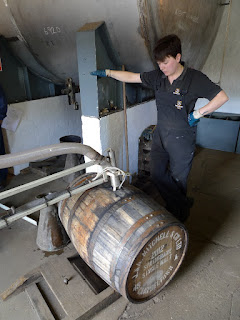 There are many types of casks. Bourbon barrels are the most common and hold 200 liters. The other two are hogsheads at 250 liters and butts at 500 liters, both of which are most likely to have held sherry before coming to Scotland. You may also see a few other types: shorter, stockier versions of both hogsheads and butts are called puncheons, long thin casks are called pipes (often having held port) and there are smaller barrels in the  50 to 100 liter range known as rundlets and kilderkins. 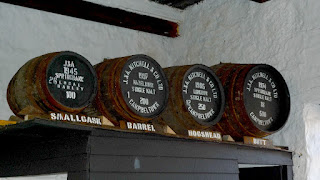 Casks will be used for scotch 3 times (1st fill, 2nd fill, 3rd fill), after that they may be discarded, or the inside could be scraped and then charred and they can be used again (re-char cask). Some distillers will paint the ends of the casks different colors to indicate which use they are on. At Springbank, they use the code letters A, B and C. 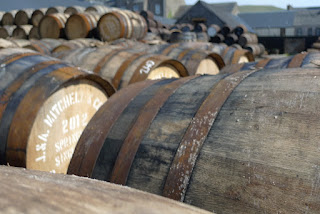 After the new make spirit is pumped into the cask and a new bung is hammered in, numbers are stenciled on to the end to indicate how many liters were put in. Detailed information about each cask is entered into a log book at this time. 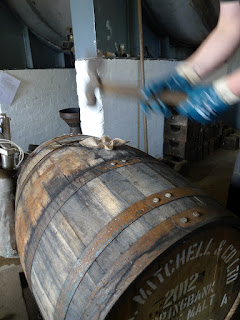 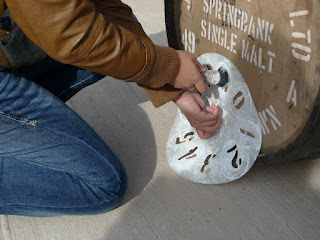 It takes some practice to get the hang of rolling 500lb casks around and trying to get them where you want them and with the bung facing up. It’s not terribly difficult, but doing it for a few hours leaves the back muscles a bit sore. 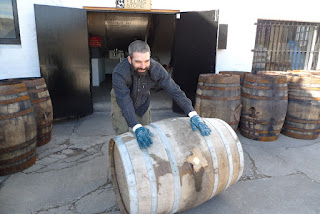 We filled just over 50 casks of various size and previous content, then helped put them in the warehouse (okay, we just watched and took pictures as the pros loaded them into the warehouse. There are many warehouses at the distillery, most are one or two floors with the casks stacked two or three high on each floor. Two of the warehouses are taller but with only one floor, and have metal racks that allow the casks to be stored seven high. 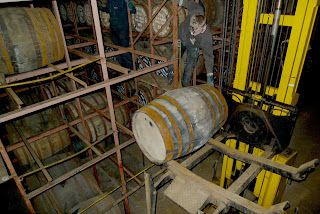 After all the hard work, warehouse exploration was the order of the day. The parent company of Springbank also owns Caddenhead, an independent bottler. The casks that Caddenhead have bought over the years from other distilleries are all stored in the Springbank warehouses. They are not in a separate area, just all spread about. The most interesting one I was shown is a Glen Grant from 1959 – crazy to see a cask that was already sitting there for 22 years when I was born. 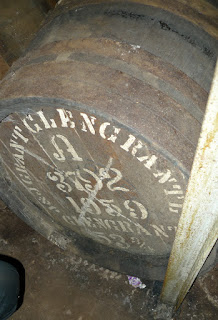 Another interesting thing I learned is that Springbank used to sell casks to private individuals, up until four years ago. You pay for the barrel full of spirit when it goes into the warehouse, then you pay a lot more when it is bottled and shipped to you. Many of these privately owned casks still reside in the warehouse, and the owners can request sample bottles at any time. We had to draw a sample from one, test to see how much was left in the cask and what the current alcohol level was, and then fill a sample bottle. Of course we had to taste it in the process – 1996 distilled Springbank, 55% abv, great flavor and balance, very smooth for its proof, lovely. Unfortunately we discovered that the cask had leaked and had lost a lot of whisky. We rotated it to get the leak above the liquid level. 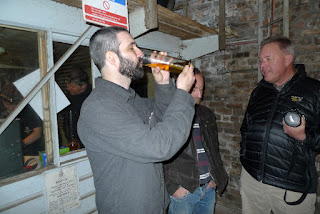 Last week I talked about the different methods employed by Bruichladdich and Ardbeg, one is a proponent of cask finishing (usually with less than a year in the alternate cask), and the other marrying various cask types at bottling time. Springbank is somewhere in between those two, they transfer whisky from one cask type to another, but usually for a much longer period of time. Two examples we saw in the warehouses were:
A Springbank that was distilled in 1997 (presumably it went into bourbon barrels first, but we’d have to look at the log book to know for sure) and transferred into Madeira casks in 2007.
A Longrow which spent 6 years in bourbon barrels, then it was transferred into Cabernet Sauvignon barrels 4 years ago.

Again we ended the night at the Ardshiel. Four of us convinced them to open a Highland Park Thor by each purchasing a dram. I followed that up with a special edition Springbank called Rundlets and Kinderkinds. Both were thoroughly enjoyed. I was feeling restless later, so I went back out to see how the pub across the street from our lodgings was. Decent little place, with at least a dozen single malts. I started with the standard 10yr Springbank, then went on to the Longrow 7yr cask strength Gaja Barolo. Now I could go to bed happy. 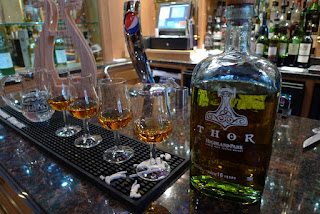