I was given a bottle of Bulleit bourbon a few years ago. I’ve lost track of how long it’s been, but my best guess is that it came my way some time in 2008. I had a fairly low opinion of it, even after sampling on several occasions, and it’s been sitting on the whiskey shelf partially consumed ever since.

A couple of weeks ago I was working behind the bar on a particularly slow day and decided to taste a few things, strictly for educational purposes, of course. For some reason I nipped into the open bottle of Bulleit, and much to my surprise it seemed significantly better than I had remembered. I was going to have to smuggle my bottle from home into work one night for a proper head-to-head comparison.

Before I get to that comparison, I need to cover a topic that has been on the back burner for quite a while. That topic is an examination of how whiskey can change over time in the bottle. This is a subject that I may revisit in future posts as well, as the opportunities arise.

Distilled spirits are quite shelf stable, and if changes do occur in an unopened bottle, it would be over a time period on the order of at least a decade, if not several. For practical purposes, I think it is safe to assume that a full bottle of whiskey will not see a change of flavor over many years, as long as it is not exposed to direct sunlight for prolonged periods and/or subjected to unusually high temperatures.

But once the bottle is opened changes do happen, albeit still at a relatively slow rate. This is something that I have had first hand experience with, having a collection of bottles that grows far faster than I drink. The rate of change definitely depends on the amount of headspace (the volume of air in the bottle relative to the volume of liquid) – a bottle minus one drink will change more slowly than a bottle with one drink left in it. Either way, I wouldn’t expect a significant change if the bottle has been open for less than a year.

I believe evaporation (especially different components of the whiskey evaporating at different rates) and oxidation are the main culprits, but I wouldn’t be surprised if other processes played a roll. On rare occasion, I do spray a mix of inert gases (primarily nitrogen and argon) into my open whiskey bottles to prolong their shelf lives.

I have actually noticed that some whiskeys get worse while others get better as this process occurs. I’m generalizing a bit, but I have seen delicate whiskeys lose aroma and flavor, falling flat eventually, while at the same time I have observed some whiskeys, having started off too hot, that have toned down and come into balance after being given some time to breath.

My point here is that this comparison needs to be taken with a grain of salt, as I’m tasting a bottle that was only opened a few months ago against on that has been opened and half consumed for at least four years. That being said, the tasting notes for the older bottle do generally match my recollection of how that bottle tasted when I first opened it.

And here is how they stack up:

Old Bottling
Reddish-amber in color.
Nose of grain and spice, but with a slight chemical-like undertone.
A little hot up front, followed by some promising grain and spice flavors, but it quickly turns astringent, then pretty much falls flat on the finish, ending hot, which might be okay if there was more flavor for balance.

New Bottling
Basically the same color, but noticeably darker.
The nose is also similar, but much fuller and lacking the off notes of the older version.
Smoother up front, with a little more body. Warming cinnamon spice is the main flavor component, but mild oak and floral notes come in to assist. It’s well balanced and finishes nicely, but could improve further with more complexity. 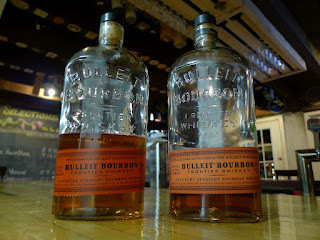 Seeing this contrast led me to research online discussions about Bulleit to see if others had made similar observations, or if any major changes in the production or specifications of the whiskey had occurred during this time period. I didn’t find much, short of a post on a bourbon forum from 2008, where someone remarked that current (at the time) samples of Bulleit paled in comparison to earlier bottlings.

The color difference that I saw between the two bottles I compared suggests that the newer one has a good bit more age on it. In 2008, Bulleit bourbon that was made for export to Australia and the UK was dropped from 90 proof to 80 proof. Add more water before bottling and you instantly have more whiskey.

This all adds up to pretty solid evidence that demand for Bulleit exceeded supply in 2008, and I’m sure they must have lowered the age of the whiskey (or more likely vatted some very young whiskey into the existing stocks) for a period of time while increasing production levels. Reports of some sharp price increases for Bulleit in 2008 were also uncovered. This would have tempered demand a bit while the increased supplies had some time to age properly.

When faced with a similar situation, other brands have taken different approaches to dealing with the problem. Knob Creek was unavailable for a few months earlier this year, the Van Winkle whiskeys are only available during limited annual releases, some brands are restricted to selling only in key markets, and the majority of the Scotch whisky industry has followed a model of dramatic price increases. I would think that compromising quality, even if only for a short time period, to ensure availability would be a risky strategy. Bulleit seems to have gotten away with it, their reputation and popularity coming through unscathed.
Posted by VT Mike at 5:14 AM