While I prefer to spend most of my time near my secluded rural homestead, occasionally one must give in to the pressure of social obligations. I recently found myself in the position of being invited to a wedding and without a decent excuse not to attend (nothing against the couple getting married, I’m quite fond of them both, but I have a strong disdain for weddings in general). Having resigned myself to traveling to the Washington DC metro area for the weekend, I decided to try to make the best of my situation - if I’m stuck with lemons, I can at least make a whiskey sour.

Fortunately, I had recently read an article about a relatively new whisky bar in DC, a place with a collection of epic proportions, called the Jack Rose Dining Saloon. My obligatory trip was gaining a sense of purpose. A little online research turned up a few more prospects: a bar called Bourbon specializing in American whiskeys, and quirky sounding place named Little Miss Whiskey’s Golden Dollar. This was turning into a whiskey mission with a matrimonial side show.

I started at Little Miss Whiskey’s since it was furthest from where I was staying and located in a less-than-upscale neighborhood. Nothing too terrible, but it might be unwise to bumble around there drunk at 2:00 a.m. I wasn’t really sure what to expect here, their web site mentioned whiskey tastings but only had a beer list, and most of the online reviews focused on the music, the outdoor patio and a cocktail called Awesomeness that came out of a Slushie machine. 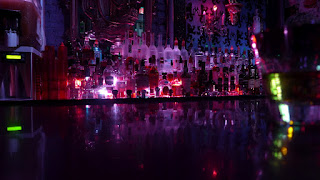 The sun was still above the horizon when I got there, and it was very dark inside, but my eyes eventually adjusted to the low light levels. The crowd was light for a Friday, but I was there pretty early in the evening. The music was eclectic (in a good way) and the décor had sort of a New Orleans / voodoo feel to it. The whiskey selection wasn’t as extensive as I had hoped, coming in between 40 and 50 bottles (about 15 single malt scotches, 15 American whiskeys, and maybe a dozen Irish bottles). Not a lot of depth, but at least they had a few variants of many of the brands they carried, rather than just the standard flagship offering from each distillery. Calling it a whiskey bar might be a bit of a stretch – it came across more as a cool, hip, upscale dive bar with a respectable whiskey selection. 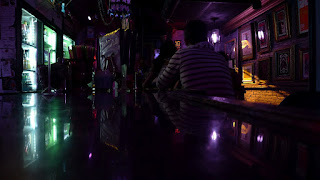 They did have a printed whiskey list on the bar, but there were only a few offerings I was excited about. I started off with a 16yr Glen Grant – the only other Glen Grant I had sampled before this was a 38yr old from Gordon & MacPhail, so I was curious to try an official distillery bottling. The pours here are a solid 2 oz, and even thought it is not normally offered, the bartender was willing to do a half pour for me.

I have found that if I’m alone at a bar and start to write tasting notes on paper, it can draw unwanted attention. Not to mention that scraps of paper tend to disappear when I drink. I’ve switched to typing my notes into my phone using the notepad function. It looks like I’m texting so people usually leave me alone and I can concentrate on what I’m tasting without being distracted. My notes on the 16yr Glen Grant are as follows:

almost no nose. fairly big. mix of malt, fruit and spice. spice builds nicely as other flavors subside. dry finish. mostly just spice at the end of the long finish. I like.

I had also noticed a few offerings from Copper Fox on the list. This is a Virginia distillery started by Rick Wasmund. Some of his whiskies are branded Wasmund’s, while others are branded Copper Fox. Their barley is all malted in-house, and they are known for smoking it with American fruit woods, as well as adding charred wedges of fruitwood and oak to the whisky while it ages in former bourbon barrels. Production is limited, and this was the first time I’ve had a chance to try anything from this distillery in spite of being on the lookout for it for several years.

The menu listed a Copper Fox Rye and Single Malt. I later learned that the Single Malt is actually bottled under the Wasmund’s label, so there was a slight error on the list. I ordered the Single Malt first, and the second bartender, who had just come on duty, didn’t notice they were out of it and poured me the Rye by mistake. I didn’t realize this until I finished that drink and ordered the Rye (from the original bartender). I was almost certain he grabbed the same bottle, and it tasted just like my last drink:

I was a little unhappy about getting the same drink twice, especially on a night when I’d have so many things to taste and really didn’t want to be hungover the next day. But it was an honest mistake, and when I explained what had happened, the bartender only charged me for my first two drinks. He was a good man and was tipped accordingly.

While I didn’t love the Copper Fox whisky, I do love what this distillery is doing – pushing the envelope to create a new style of whisky that is uniquely American. I’m looking forward to trying more of their offerings in the future.

As for Little Miss Whiskey’s Golden Dollar, it’s a cool and unusual place. I wouldn’t go out of my way to make the journey there just for the whiskey, but if I was with friends who wanted to go to a fun, interesting bar and I still wanted to have some decent whiskey options, this would be the spot.

A thirty minute walk and a short train ride got me to the neighborhood with the next two whiskey bars, but I’ll to save the rest for my next post.
Posted by VT Mike at 3:20 PM