At last, I have reached the final Scotland follow-up post. This one will include an almost forgotten whisky review, but first a few thank-yous are in order.

We had the good fortune to stay at a series of top notch B&B’s, with wonderful proprietors who were instrumental in making our trip a truly special experience. Gary and Sue at the Heatherfield House in Oban, Jane and Adrian at the Strongarbh House in Tobermory on Mull, Andrea and Donna at the Cala Sith Guest House in Port Ellen on Islay, and Angela and Callum at the Feorlin Guest House in Campbeltown; they all could not be thanked enough in person. Their warm hospitality, local knowledge, and phenomenal home cooked meals made our trip the journey of a lifetime.

We also met a lot of great people along the way; tour guides, bartenders, distillery workers and whisky tourists from many other nations among them. But our Whiskey School mentors deserve special thanks. Pop, Norman, Kerry and Gordon at Springbank graciously allowed us to interrupt their normal work routines. Their generous information, patience and good nature were greatly appreciated.

As one drives south across Islay on the A846, the wide open agricultural landscape is suddenly interrupted by the massive, looming buildings of the Port Ellen Malting facility on the northern outskirts of the town of Port Ellen. Once the site of the distillery of the same name, many of the original warehouses and other distillery buildings lie just out of site behind the newer, dominant structures.

The distillery dates back to 1825, and even though no whisky was produced from 1929 until a 1967 rebuild, malting and warehousing operations continued throughout that time. The Port Ellen Maltings (where the process is an automated, mechanized alternative to traditional floor maltings) was constructed in 1974, alongside the distillery. Malted barley from this facility has been supplied to most of the distilleries on Islay since 1987, but originally its malt only went to Caol Ila, Lagavulin and Port Ellen. Those three distilleries were acquired by Distillers Company Limited (DCL) in the 1920’s. The 1980’s brought tough times to the scotch industry, and with three Islay distilleries in their portfolio, Port Ellen was deemed to be surplus and closed in 1983. Many single malt enthusiasts bemoan that fateful decision to this day. A series of mergers and acquisitions starting in 1986 eventually put the three brands, along with many others, in the hands of current owners, Diageo. 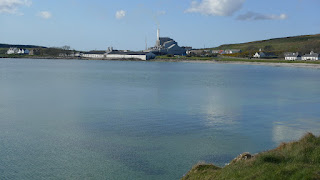 Not having produced any whisky for close to 30 years, Port Ellen single malt is becoming a rare commodity, and expensive. My last night on Islay seemed like an appropriate time to take the plunge. I made the short walk to the pub at the Ardview Inn, bearing the brunt of the Islay head wind, and ordered up a 27 year old Port Ellen (at 46% abv, distilled in the spring of 1983, from independent bottler Douglas McGibbon). I then sat quietly in the corner, tasting, contemplating, and typing notes into my phone. 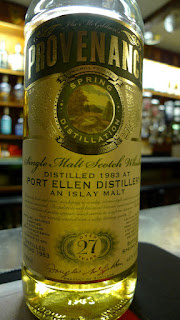 My tasting notes, just about verbatim: Pale straw yellow. Good nose of sweet smooth smoke. Smooth moderate peat smoke on the palate, moves nicely through a range of flavors, from stone fruit to peaty smoke to a warming spicy finish, back into floral and fruit at the end.

So, did I like it? Was it worth it? While I certainly thought it was a well made, enjoyable single malt, I wasn’t blown away, and I definitely tasted more impressive offerings that week. But I think that may just come down to personal preference more than anything else. £25 is a steep price to pay for a single drink, at least in my world. While I found it to be an enjoyable dram, I wouldn’t pay that much for a second sampling. But to me it was worth the price just to satisfy my curiosity, and at the time I was able to justify the expense with an utterance of “hey, I’m on vacation after all”.
Posted by VT Mike at 4:01 AM