Two from the Isle of Jura

Looking at a basic map of Scotland several years ago, I made the assumption that one got to Islay by way of Jura, with a quick ferry ride at each end of the island. I later learned that this was not the case and that the only way to Jura (at least with a car) was via a short ferry ride from Islay, after having taken a much longer ferry ride from the mainland to Islay.

What I had once imagined would be an obligatory visit to the Isle of Jura distillery on the way to Islay, turned out to be an optional day trip that didn’t fit very well into the schedule of my trip around Scotland. Having tasted only one example of single malt from Jura, and not being all that impressed by it, the optional day trip was one that I never even seriously considered.

During my stay on Islay, I was treated to glorious views of the Paps of Jura (a small group of steep, rounded mountains that rise dramatically from the sea) from a multitude of locations. Since my return home, I have sampled an offering from the Isle of Jura distillery that I have a much more favorable opinion of. 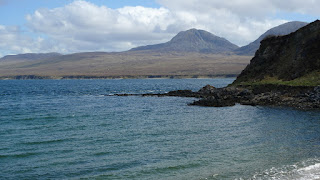 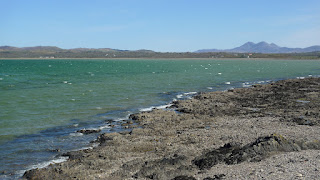 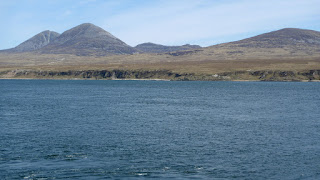 Next time I am on Islay, the optional side trip will be seriously considered. For now, I can compare the two above mentioned single malts. Superstition
A vatting of older Jura and younger, more heavily peated Jura. Medium golden-amber in color. The assertive, fragrant nose has a mix of peat smoke, malt, perfume and pine. It’s a little hot across the palate, with moderate peat smoke quickly followed by strong perfumed floral flavors. The two flavors seem to be at odds with each other, not in harmony. The finish has some length and warmth, with dry spice notes joining the fray at the end, but the flavors put forth still fail to impress overall.

Origin 10yr
Made from lightly peated malt. Almost identical in color to the Superstition, maybe just the slightest bit lighter. The nose is also similar to the Superstition, but with a lower proportion of peat smoke, and everything more subdued overall. It has mild peat on the palate, balanced by caramelized malt flavors. Gentle, not aggressive. Respectably long finish with subtle floral notes emerging, and then giving way to a dry spiced ending. While it’s not terribly complex at any given point, the flavors evolve nicely and are well integrated. Quite enjoyable.

The 10yr puts the Superstition in context. I can see where they were coming from and what they were trying to do. It wasn’t well executed, and doesn’t really work, but it makes more sense to me now.
Posted by VT Mike at 3:05 AM