A short ride on the DC Metro from Union Station to Dupont Circle brought me within walking distance of the Adams Morgan neighborhood, home to the Jack Rose Dining Saloon and Bourbon. The two bars share a common ownership, and are on the same street, just about a block apart.

Jack Rose was just a fifteen minute walk from the closest Metro station. I arrived around 11:00, and looking in from the outside it seemed very crowded and very loud. The noise levels seemed to echo a common complaint of many online reviews. With a large, rectangular open floor plan, I think that problem is just the nature of the space. I decided to save the best for last, and hoofed it a little further up the street to Bourbon.

With a long, narrow layout, Bourbon has a more intimate feel than Jack Rose. It too was pretty packed with people when I got there, and I’m guessing this is typical of most bars in the area at 11:00 on a Friday night. I had checked out their website in advance, which shows a whiskey list 200 bottles deep, primarily American offerings as one would expect. The standard pour is 2 oz here, and ½ oz pours are available for most of the selections.

Of course no seats were to be had at the bar, or near it for that matter. The bartenders were super busy, and it seemed that far more people were drinking cocktails than whiskey. I jockeyed my way forward and waited patiently for the attention of one of the two bartenders. It took a while, but when it was finally my turn, I went straight for the 23yr Pappy – only to be informed that they ran out of it a few weeks before. A short pause from me, and she was on to the next thirsty soul. I really can’t be too critical of this, I’ve spent plenty of time on the other side of the bar and when that many people want drinks at once, a good bartender will move on to someone who knows what they want after about 10 seconds of indecision. 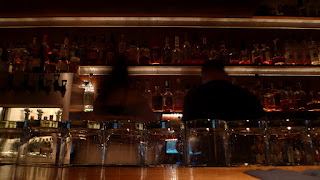 Okay, on to plan b – pick something off the shelf. Fortunately, I’ve been at this long enough that I can figure out what many of the whiskey bottles behind a bar are, even if I’m not close enough to read the labels. My eyes honed in on a pair of matching ½ size bottles that could only be this year’s release of the Woodford Reserve Master’s Collection – a pair of 100% rye whiskeys, one aged in new oak casks, the other in used oak casks. It wasn’t too long before I was able to order a ½ oz of each, and a bar stool had actually become available in the mean time. I had narrowly passed up the opportunity to buy these bottles (at $100 for a pair of 375ml’s) three or four months prior, so I was really excited to have a chance to try them. Again, that tasting notes typed into my phone are essentially unedited. 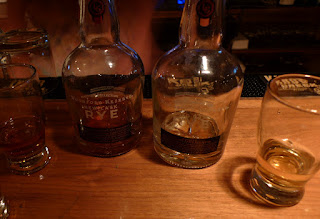 Over the next hour the crowd thinned out a bit and the bartenders, who were both quite helpful, were able to spend some time guiding me through my selections. I later learned that the Van Winkle Rye had sold out too, but that was okay, there were plenty of interesting choices here.

While visually scanning through the bottles, I noticed one with a peculiar shape, short and squat with an extremely long slender neck. I thought it might be something I had hunted for in the past, so I asked one of the bartenders what it was. She brought the bottle over and it turned out to be the Willett Pot Still Reserve Bourbon (something totally new to me), a moderately priced 6yr old at 94 proof. The next thing I knew, she had poured me a (presumably) complimentary splash. The bottle was more impressive than its contents.

The next thing to catch my attention was a collection of bottlings from High West, another producer who had been on my radar for a bit, but remained untried. A micro-distiller based in Utah, they actually bottle a variety of whiskeys, younger ones that they have distilled themselves, and older ones that they have acquired from other sources. I decided to put my faith in the bartender, and asked him to pour me a glass of his favorite High West offering. I ended up sipping on the Double Rye, a marriage of 2 yr old (95% rye and 5% malted barley), and 16 yr old (53% rye, 37% corn and 10% malted barley).

Very mild nose. Palate is familiar, but can’t put my finger on it. Some sort of floral spice? Smooth finish. B+. 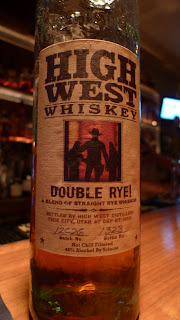 Next I noticed most of the Hudson Whiskey line from Tuthilltown Spirits. This is a fairly new distiller in upstate New York, known for aging their whiskey in small casks and using other techniques to increase the surface area of wood that the spirit is in contact with in order to mature their whiskeys more quickly. The lineup is well marketed, being presented in distinctive 375 ml bottles with eye catching labels, but they don’t come cheap, retailing around $50.

Once again, I decided to go with the bartender’s choice from the lineup. When I told him what I was after, he bluntly informed me that he didn’t really have a high opinion of any of them. I was then presented with another (presumably) complimentary splash. This time it was the Hudson Manhattan Rye Whiskey, I assumed it was the Hudson offering that the bartender found least offensive. My unbiased opinion definitely fell in line with his. 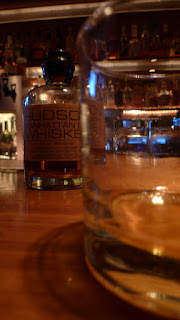 The bar staff had steered me well thus far, and I felt safe putting the choice of my last drink here in their hands. I soon found myself sipping on a glass of Old Pogue Master’s Select Bourbon and it did not disappoint.

Subtle, smooth, sublime. It doesn’t do anything exceptionally, but it does everything extraordinarily well. A good, solid bourbon.

I like this bar, it has a comfortable feel, a helpful staff (who aren’t afraid to share their honest opinions), and a well rounded list of American whiskeys with plenty of obscurities and limited releases. For the true whiskey fanatics, I would suggest going at off-peak times to avoid the crowds. 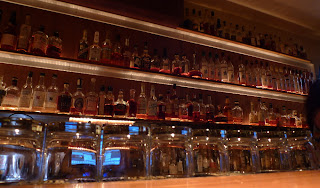 I hate to stretch this out over 3 posts, but I’m going to for the sake of avoiding going far too long between posts.
Posted by VT Mike at 1:19 AM