On the evening of our first night on Islay, my father and I sat in the lounge of the Harbour Inn, enjoying a glass of wine and perusing the dinner menu. I couldn’t help but overhear the conversation between the two upper-crust English couples sitting nearby. When the topic turned to local distilleries, a rash of criticism was aimed at Bruichladdich. Most of their ire revolved around the dizzying array of special releases that had come out of the distillery in recent years (a debatable point, but beyond the scope of this post). Then one of them made a proclamation, something along the lines of “And what on earth are they doing now, mucking about with gin?” in reference to the Botanist Gin, which Bruichladdich started producing in 2010. With personas reminiscent of Thurston Howell III, I’m sure they had made their millions many times over, but they seemed to be oblivious to the economics of the whisky industry. 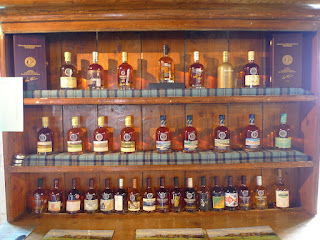 With lead times of 10 or more years between production and sales, and a product demand prone to unpredictable cycles of boom and bust, whisky is a tricky business to say the least. Gin, on the other hand, seems to have enjoyed a more stable pattern of consumption in recent history. And because it is not aged, increases or decreases in production can quickly affect inventory levels, so supply can be promptly adjusted to meet changes in demand. It doesn’t take much insight to see that gin is the perfect economic ballast for the treacherous seas that every whisky company must navigate. Of course, I refrained from informing my fellow diners of their ignorance.

A week later I was in Whisky School, where I learned much more about the inner workings of the whisky business. While the subject matter was primarily focused on production, I was still able to pick up some information along the way that helped me to infer a lot about the operational philosophy of Springbank’s parent company, J&A Mitchell & Co. By the end of the week, I had come to the conclusion that the history of Campbeltown’s whisky industry had been well studied, and that the lessons learned are currently being applied. The following is my analysis of what is being done to keep the mistakes of the past from being repeated.

In the first half of the 1800’s Campbeltown became Scotland’s most praised and respected whisky producing region, and was often referred to as the “whisky capitol of the world”. Just having the word Campbeltown on the bottle was enough to command consumer attention, and the town’s single malts were highly desired by blenders. Nearly two dozen distilleries were licensed here in the 1820’s and 1830’s, and the town was actually granted regional status, like the Highlands and the Lowlands. Unfortunately, that massive success partly led to the region’s downfall in the early 1900’s. Quality was compromised for quick profits, and with a tarnished reputation and plunging demand the vast majority of Campbeltown’s distilleries closed in the 1920’s. After a handful more closed in the 1930’s only two distilleries, Springbank and Glen Scotia, remained active for the rest of the 20th century. Not only had the town lost its prestige, it eventually lost its official status as a whisky producing region.

After my time there, it is my belief that returning some of the former glory to the area’s whisky industry is part of the master plan of the management of J&A Mitchell & Co. The resurrection of the Glengyle distillery in 2004, along with the introduction of Hazelburn single malt in 2005, has brought the town to a total of five unique single malts from three operating distilleries. The Scotch Whisky Association has recently reinstated the town’s official regional designation. The company has also started to integrate the phrase “Campbeltown Malts” into their marketing campaigns. Looking to the past, it seems obvious that they have seen the importance of not just promoting individual single malts, but also promoting the town as a region with a reputation for producing whisky of exceptional quality. 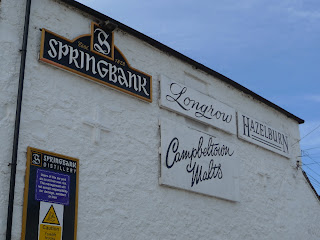 Campbeltown distillers enjoyed unrivaled prestige and a stronghold on the Glasgow market for much of the 19th century. But by the turn of the century, many distillers had tried to take advantage of the success of the region and maximize profits, even if it meant putting out an inferior product. I’m speculating here, but it is probable that lower quality, imported barley was used (demand likely having outpaced local production levels), short fermentation times employed, and stills would have been run hot and fast, with a wider cut taken. All of these steps would have sped up the process and increased output. The inferior spirit was then aged in substandard casks. I’m not sure if it was a rumor spread by competitors or just the running joke of the day, but at one point Campbeltown whiskies were said to be aged in old herring casks. The region’s reputation was ruined.

Springbank managed to maintain an image of quality throughout the tumultuous times. J&A Mitchell & Co seems to recognize very well the importance of continuing to produce first rate whiskies, and even though their two distilleries are set up very differently, they both achieve this in the end. Springbank is more of a working museum; the whisky is very much hand made, in an often labor intensive manner. It seems like the process is slow and inefficient here, sometimes just for the sake of maintaining tradition, but more often for the sake of maintaining quality. By contrast, Glengyle has a more streamlined layout, and a lot of modern equipment that minimizes the man power need to run it. But at the same time, as with Springbank, 100% of the barley used is floor malted and sourced only from Scotland, and long fermentation times in boat-skin Larch washbacks are followed by a slow distillation. The spirit is then aged in quality casks which have been carefully procured from reliable sources. Neither distillery has ever chill-filtered or added artificial coloring. 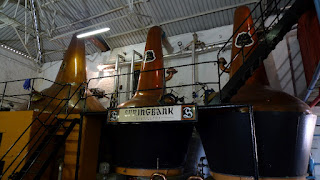 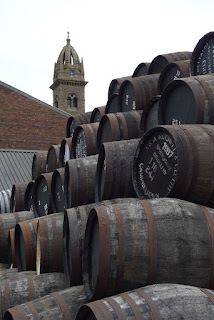 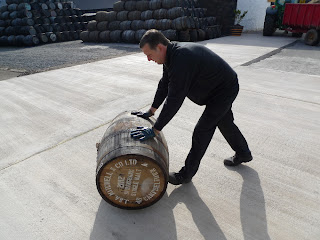 The death knell of the Campbeltown whisky industry was a combination of overproduction and a series of events that caused a dramatic decrease in demand. Times of high demand led to overconfidence, and many distillers increased their output to reckless levels. Much of this demand was driven by blenders and speculators who ended up sitting on stockpiles of overpriced whisky. When Pattison’s, Scotland’s largest blender at the time, collapsed in 1898 amid a fraud scandal, Campbeltown’s biggest whisky customer was gone over night. The construction of railroads in the late 1800’s into the Speyside region (which was rich with distilleries) provided easy access to Glasgow, breaking Campbeltown’s monopoly on that important market. WWI (1914-1919), Prohibition (1919-1933), and the Great Depression (1930-1940) all caused a strain on the whisky industry in general, and on Campbeltown in particular with its weakened reputation.

The powers that be at J&A Mitchell seem to be committed to not letting history repeat itself. Citing unstable commodity prices in 2008, Springbank stopped production for two years. Many in the industry thought this odd at the time, as whisky seemed to still be in a boom period that started earlier in the decade. But considering the current economic state of the world, especially the EU, it now looks to have been a very wise move. The Springbank distillery is currently operating at about half of its annual production capacity.

A lot of people are also very surprised to learn that the new Glengyle distillery is only operational for one month out of the year (it is run in November by the Springbank staff when that distillery is closed for maintenance). But until the flagship 12yr old becomes available in 2016 and actual demand levels can be established, it makes sense to minimize production. The alternative is to risk sitting on a huge stockpile of single malt that can’t be sold.

The company also keeps tight control over the whisky it produces these days. Very little Springbank makes it into blended whiskies and most of it that does ends up in their own Campbeltown Loch and Mitchell’s 12yr blends.

As a student of Whisky School, I learned that the parent company of Springbank has acquired most of the land between that distillery and Glengyle. The areas that they aren’t currently using are being leased out to other businesses, but are available to build future warehouses or even a second bottling hall. Although they are operating in a fairly conservative mode right now, they are smartly positioned for future growth, should market conditions warrant it.

And now my ramblings have come full circle, back to gin. In 1972, the independent bottler William Caddenhead added Old Raj Gin to its portfolio of products. Perhaps it is just coincidence, but that is the same year that Caddenhead’s was acquired by J&A Mitchell & Co. I’m not sure where the gin is distilled, but I did learn that the addition of Saffron (which makes Old Raj rather unique) happens in-house, and that the gin is bottled in the Springbank bottling hall. Maintaining a gin as part of their product line seems to be just one more step that the company has taken to ensure a long future.
Posted by VT Mike at 2:01 PM