The history of the Glengyle distillery is intertwined with that of the Springbank distillery, so one must go back to their beginnings to see how things have some full circle.

In 1837 brothers, John and William Mitchell acquired the Springbank distillery which had been established in 1828 on the site of the malt barns and illicit distillery owned by their father, Archibald Mitchell II. At some point, William left Springbank after quarrelling with his brother over sheep. He joined his other two brothers at their distillery, Rieclachan, before eventually going out on his own, establishing the Glengyle distillery in 1872.

Glengyle was the 32nd of 34 distilleries to be licensed in Campbeltown in the 1800’s. Several of these operations closed in the 1850’s, but most went out of business after 1890. Glengyle held on until 1925, and with the 1934 closure of Rieclachan, Campbeltown was left with just Springbank and Glen Scotia as operating distilleries.

For a time after the closing, the Glengyle distillery buildings were used as an indoor shooting range by the Campbeltown Miniature Rifle Club. Attempts to bring the distillery back into operation were made in the 1940’s and again in the 1950’s, but neither was successful. By 1970 all of the equipment related to distilling was gone, and the buildings were being put to use by the Kintyre Farmers Cooperative.

Finally, in the fall of 2000, a new company was formed by J&A Mitchell & Co, with the intention of purchasing the former Glengyle site and returning it to its original purpose of whisky production. As the parent company of Springbank, J&A Mitchell & Co is currently led by Hedley Wright, who is a direct descendant of Archibald Mitchell II. Not only was the long deceased distillery being brought back to life, it was also being brought back into its founding family.

Assembling a distillery from scratch in abandoned buildings, whose restoration had to adhere to historical codes, was no easy task. It would be 3 ½ years before distillation took place. A used malt mill was acquired from the recently upgraded Craigellachie distillery, and the long dormant stills of Ben Wyvis were brought out of retirement for use at Glengyle (Ben Wyvis was a malt distillery which operated within the Invergordon grain distillery complex from 1965 to 1977). The rest of the equipment in the distillery would be new and purpose built. 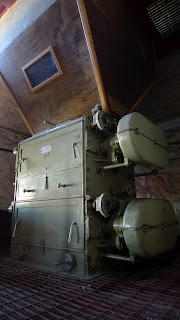 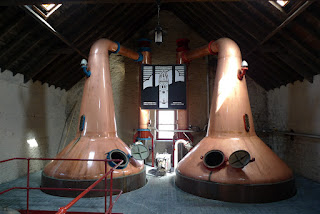 Currently, all of the barley for Glengyle is malted (on traditional floor maltings) at Springbank. The former malting facilities at Glengyle are available (but in need of restoration) should future demand dictate that each distillery have the capacity to malt barley in-house. All of the Glengyle casks are currently being stored in the Springbank warehouses, but there is plenty of space available between the two distilleries for future warehouse expansion. 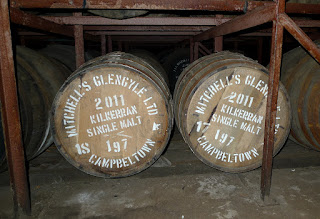 All things considered, it was logical to name the new distillery Glengyle. Unfortunately that name was already being used for a vatted malt from the Highlands, so an alternate name had to be chosen for the single malt produced at the Glengyle distillery. Kilkerran was selected as it is derived from the Gaelic name of the original settlement of Saint Kerran, in the current location of Campbeltown.

Ultimately, the standard Kilkerran bottling will be a 12yr, but that won’t be available until 2016, so some younger variants are being offered in the mean time. The first six casks (each of a different type) have been put up for sale as bottles which can be bought in advance for £175 a piece. These will be bottled as 10yr olds in 2014. Additionally, each year, from 2009 – 2013, a “Work In Progress” bottling of whisky distilled in 2004 will be released in limited quantity.

Tonight I am tasting Kilkerran Work In Progress 2, a 6yr old released in 2010.

It is pale golden in color, and the nose is full, with aromas ranging from floral to sweet/malty. Medium to full bodied, it’s primarily floral on the palate with a malty backbone, and turns warm/spicy on the finish. No flaws, but it comes across as being a bit immature. The finish isn’t big, but lingers on palate for some time, with just a hint of peat smoke emerging.

If this had been the only example of Kilkerran I had tasted, I likely would have relegated it to the category of “wait and see” (for the 12yr bottling). But as I mentioned in the “Scotland, Day 13” post, I had the opportunity to taste a sample of 8yr Kilkerran directly from a port cask (one of the original six casks filled in March 2004), and was stunned to say the least. I have seen the potential, and I’m looking forward to future Kilkerran bottlings with great anticipation.
Posted by VT Mike at 4:41 AM