I’ve made an effort to correctly pronounce the names of single malts from early on, and with the likes of Bruichladdich and Bunnahabhain it’s safe to assume one’s got it wrong without some research and practice. But with a name as seemingly simple as Oban, I never even gave so much as a second thought as to what to proper pronunciation might be. Yet it turns out that this is probably one of the most commonly mispronounced single malt names, at least here in the U.S. Fortunately, I was politely informed of my phonetic error by a kindly Glaswegian six weeks before I left for Scotland, saving me the embarrassment of saying it incorrectly while I was staying in the town of the name. So, for the record, it is not oh-bahn, but owe-bin, coming across almost as one syllable.

14 yr Oban is the almost singularly ubiquitous distillery bottling. But there are other expressions out there. As with many other Diageo owned single malts, there is also a Distiller’s Edition. 300 casks are set aside each year for this bottling, which is finished in Montilla Fino sherry casks. A special release of 18 yr Oban proved popular recently, and now 300 casks are being set aside annually for that expression as well. Back in 2002 there was a very limited release of 32 yr Oban, and over the years several different releases have also been put out under the Manager’s Dram title.

While visiting Oban, my father picked up a bottle of a distillery exclusive, cask strength edition. At the time, we were told that although it has no age statement, it was primarily 14 yr with some older whisky in the mix, and possibly some variety of cask types. I decided to compare this to the standard 14 yr, which is aged exclusively in 2nd fill bourbon barrels. There were two or three months between the tastings, so it’s not exactly a direct comparison, but close enough.

Oban 14yr 43.0%
Fruit aromas dominate the nose, primarily orange, but supported by a malty backbone.
It almost seems too mild up front, but the flavors build up quickly. Medium to heavy body. Nice depth, with fruit (primarily orange, maybe some apple and pear too), a little oak, a little spice, just a whiff a peat smoke, and a pinch of sea salt all playing nicely together. After peaking, the flavors fade slowly through the long finish. Well balanced throughout. 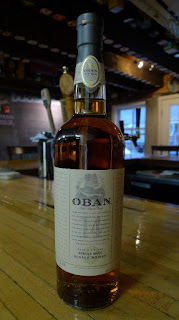 Oban Cask Strength Limited Edition (bottled in 2010)
The nose is intense but smooth, with creamy fruit aromas. Fiery up front on the palate, but the heat gives way to intense flavors (maybe “is joined by” is a more appropriate term than “gives way to”). Lots of body, quite viscous on the tongue. It’s kind of hot, but it’s entertaining to experience the burning heat and the intense, evolving flavors battle for dominance on the palate, pretty much from start to finish. Classic Oban balance of fruit and oak with just a hint of peat, and some very mild floral notes. Like the 14yr on steroids. 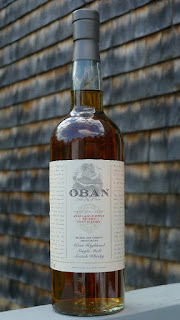