I had been at Bourbon longer than intended and sampled more whiskeys than I had planned to; there’s a distinct possibility that I hay have been moderately intoxicated by the time I arrived at the Jack Rose Dining Saloon, around 1:00 in the morning. I feel fortunate to have the ability to maintain my composure under such circumstances. But I do have to apologize for the quality of the pictures in this post; my photography went from being creative earlier in the night to sloppy by the end.

My springtime visits to Duffie’s Bar on Islay with 300 bottles and the bar in the Ardshiel Hotel in Campbeltown with 450 bottles had both been real eye openers for me. But the 1400 bottle collection at Jack Rose was truly a sight to behold. The space is roughly 25’ by 50’ and features high ceilings. Whisky bottles adorn 2/3 of the interior wall space, and reaching as many as six bottles vertically, several library ladders are needed to access the higher shelves. I would have loved to have checked out their whisky list in advance of my visit, but at the time they didn’t have it on their website. They have since posted a partial list online, showing about 350 selections, I think it covers maybe half of their single malts. 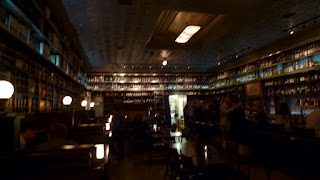 Upon my arrival I asked to see the list, and was handed a hefty book that, while well organized, could easily overwhelm with volume alone. I was kind of surprised by some of the omissions; I thought surely a list of this size would feature 40yr Glenfarclas or 21yr Springbank. Of course there were plenty of offerings far more rare than the above mentioned, and many of whose existence I wasn’t even aware. Official distillery bottlings ranged from run-of-the-mill flagship expressions to rarities and limited releases. All of this was backed up by a healthy selection of independent bottlings, giving astounding depth to most categories.

After much perusing, I finally settled on a 19yr Bunnahabhain at 54.3%, part of the Raw Cask series from independent bottler Blackadder. This is a cask strength, non-chill filtered, single cask bottle, I believe from a sherry butt. Pretty much hit a home run right off the bat:

And yes, I meant that in a good way. I tasted several Bunnahabhans when I was on Islay, but none at such high proof. It was truly stunning to see where this whisky could go. 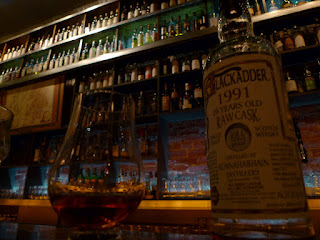 It was getting pretty late at this point, and I still had to navigate my way back to the hotel before the trains stopped running at 3:00 – I had time for one more glass of whisky. The bartender seemed quite competent, so I threw caution to the wind and put the fate of my last drink of the night in his hands.

I was a little apprehensive when he pulled a bottle from the Isle of Arran distillery off the shelf. I have a bottle of their 10yr 46% at home, and I’m kind of indifferent to it. But this was a Port Cask Finish version, with no age statement at 50% abv. It’s amazing what a little Port wood and a slight increase in strength can do - one taste put this distillery in a whole new light for me. 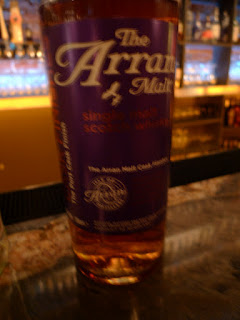 For some unknown reason, I took a small pad of paper out of my pocket at this point and wrote down my tasting notes instead of typing them into my phone. Unfortunately, my normally meticulous handwriting had devolved into something that only a doctor could be proud of, and now I’m having a hard time deciphering my scribblings. Here’s my best attempt:

Earth, quince and honey were the really tough ones; those may have been entirely different words. But the bottom line was that I really liked it. Now I’m excited to try out other Arran expressions and maybe I’ll even pay a visit to the distillery some day.

For the whisky obsessed, this place is a must see. As impressed as I was, the realist in me has a hard time believing that such a business model would be viable outside of the land of lobbyists, political schmoozing and international deal making.

I somehow got slightly disoriented trying to retrace my steps in reverse, so the 15 minute walk back to the train station took 30 minutes, but I got there by 2:45 and managed to catch the last train out to Bethesda.

Apparently, in my pre-trip whisky hunting euphoria, I grabbed the wrong suit; one that I’ve owned for far longer than I care to admit. So, yes, I had to suffer through the wedding moderately hung-over, wearing a horribly ill-fitting suit. But it couldn’t have been too bad; I did manage to throw back a glass of 12yr Chivas before the sun set.
Posted by VT Mike at 9:18 AM