My original intention was to post reviews of the Kilchoman Spring 2011 Release and an early Kilkerran release before I left for Scotland, as a prelude to the trip. Of course, planning and preparations for the trip took precedence, and those posts were put on the back burner. There are still a few Scotland follow-ups to come, but I’m going to intersperse them with these reviews to keep things fresh.

Kilchoman is one of a handful of new distilleries built in Scotland in the last ten years, and the first new one to open on Islay in 124 years. Opening a new distillery from scratch has got to be a daunting prospect. Land and buildings must be purchased or leased, milling, mashing, fermenting and distilling equipment must be acquired. Casks are another big expense. All of that and many years of production costs until you have properly aged whisky to sell. Unless you have incredibly deep pockets, something else must be done to generate revenue more quickly. Some new whisky companies will start off making vodka or gin for quick cash flow in the early years. Others will sell futures (pay now for the whisky that will be ready in 10 years).

Kilchoman has taken a dual approach to solving this problem. They actually started off as an independent bottler using the MacBeatha brand name. Not much info is available, but these all appear to be distilled at other Islay distilleries and bottled at Kilchoman. I did see one such bottle on display at Kilchoman during my recent visit, but didn’t think to ask about it at the time. The second method employed by Islay’s newest distiller has been to bottle and release some very young expressions. They started with 1 month, 1 year and 2 year old new spirit (Scottish law dictates that it must be aged at least 3 years to be called whisky), followed by several releases in the 3 – 5 year range. The current popularity of all things Islay combined with excitement over the first new distiller on the island in more than a century has fueled demand for these early releases. But this can be a risky strategy - if the young offerings don’t impress, the brand’s reputation can be damaged at an early stage. 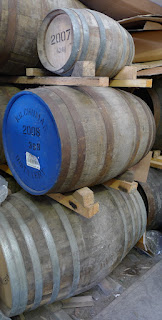 The Spring 2011 Release is comprised of 4yr (30%) and 3yr (70%), all of which was aged in first fill bourbon barrels, with the 4yr being finished in oloroso sherry butts for 5 weeks. 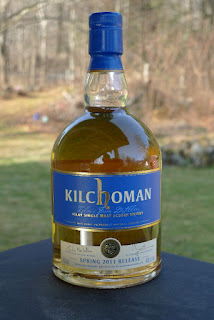 The nose is dense and smoky in a youthful way without coming across as immature. Fairly heavy in body with aggressive smoke up front on the palate, countered by a balancing richness, which quickly gives way to smoldering peat flavors. Then it gradually progresses into the long, camp-fire finish which is laced with subtle fruit notes.

It is quite enjoyable regardless of age, and that much more impressive when its youth is taken into account. I’m guessing that by the time it reaches 10 years it will gain complexity and lose some of its intensity. Lovely now and showing great potential.
Posted by VT Mike at 2:51 AM