stats: Crown Royal - blended Canadian Whisky, 80 proof, $25
Crown Royal Black - blended Canadian Whisky, 90 proof, $30
I've always considered Crown Royal to be the king of Canadian whisky, but there really weren't any other Canadian whiskies that I even considered, so I guess that doesn't mean too much. The lineup from Crown Royal has slowly grown over the years, with the addition of the Black last year bringing the total up to 5. I tasted the Extra Rare (XR) a few years ago, and wasn't too impressed. I don't have access to any right now, and I'm not going to hunt down a $100+ bottle of something that I don't really like just for the sake of comparison. So tonight I'll check out the standard Crown and the Black, my next post will cover the Reserve and the Cask No. 16.
The flagship Crown Royal (sometimes referred to as the Deluxe) has a medium amber hue and pleasant nose. On the palate, it is smooth and well balanced, with a surprisingly long finish. It definitely has some Bourbon-like qualities, similar to a fairly mild Bourbon, but with a bit less sweetness. Most of the flavor comes on late, but it hangs on for quite a while with nice spice notes. While many whiskies with long finishes have great complexity and meander through a spectrum of flavors as they linger on, that is not the case here. I hate to make up words, but I'm at a loss, so I'll have to call it mono-flavorisitic. But I like the flavor, that's really not such a bad thing. While I consider it to be fairly mild, it does have enough backbone to stand own its own and be sipped straight. Maybe not my first choice of beverage, but if I was at a bar with a limited selection, I'd be happy to have this as an option.
Next up is the Crown Black. A darker, bolder, higher proof Crown Royal. The aromas are definitely more potent, but less pleasant. The color is significantly darker, but that could be from a number of factors (caramel coloring, new oak barrels, more heavily charred barrels, being put into the barrel at a lower proof - i.e. more water added before it goes in the barrel and less water added before it goes in the bottle). It has a bit more body than the standard Crown, a more viscous mouth-feel. The flavor comes on stronger and more quickly. There's a bit of sweet maltiness up front, but that gives way to more harsh flavors. The spice notes are there, but they are mingled with unpleasant sooty notes. Late in the finish it gets a bit hot (as in alcohol burn without flavor to balance it). I've certainly tasted worse, but $30 a bottle is a bit pricey for something that I would relegate to mixing with cola. The standard (and less expensive) Crown is more delicate, elegant and most important, drinkable. 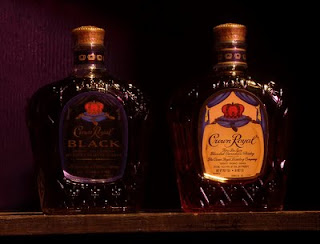 When I wrote this last night I had a bit of a mental block, and was forced to make up the word mono-flavoristic. Of course it all came back to me this morning. "One dimensional" is the term that eluded me. My apologies to anyone who was offended by my assault on the English language.