stats: Crown Royal Reserve - blended Canadian Whisky, 80 proof, $40
Crown Royal Cask No. 16 - blended Canadian Whisky, 80 proof, $80
And now on to the upper end of the Crown Royal lineup, the Reserve and the Cask No. 16. The Reserve has actually been around a lot longer than I realized, originally introduced in 1992 as Crown Royal Special Reserve. It was re-branded as Crown Royal Reserve in 2008, two years after the introduction and the Extra Rare. I'm guessing that the reason  for the name change was the confusion caused by the abbreviations for the names of these two whiskies, SR and XR, which sound very similar. Bar patrons who think they are getting an SR and end up with a drink that costs three times as much tend to get a bit grumpy. The Reserve starts as the same base whisky that makes up the flagship Crown Royal, but the better barrels are set aside and aged longer. The Cask No. 16 likely starts off in a similar fashion, but before bottling, the whisky spends additional time in casks that previously held cognac for 12 years. This variant of Crown was first brought to market in 2007.
The color of the Reserve is noticeably darker than the standard Crown Royal. There doesn't seem be a big difference in aroma between the two, perhaps the Reserve is just a bit richer on the nose (again, I'm probably not using the best glassware for nosing). On the palate, like the standard Crown, the flavors of the Reserve are fairly mild up front, then come on strong in the finish, which is quite long. They have a similar flavor profile, but where the original is a bit one-dimensional, the Reserve gains depth and complexity. It has more intense spice notes, but retains that elegant, drinkable Crown Royal quality. There's actually less of a difference between the two than I expected. Tasting them side by side has actually elevated my opinion of the original Crown and my appreciation of its long finish. The Reserve is a superior whisky, but only by a small margin.
The Cask No. 16  has a unique label. There is a wood grain printed on the inside (bottle side) of the back label, which is visible through the whisky as you look at the wording on the front label (which has a clear background). It's hard to see unless there is a bright light shining on the front of the bottle. I only noticed it when I was photographing the two bottles. The nose, while again being a bit weak, is definitely different. It reminds me of isopropyl alcohol along with some fruity qualities (that makes it sound like it smells bad, it really doesn't). Up front, the Cask No. 16 seems like it might be a lot like the Reserve, but the flavors from the cognac barrels quickly come into play. The flavors that dominate are slightly sweet and perfume-like. The quintessential Crown Royal spice notes are still there, but they drop into the background, only showing up late in the finish and tempered by the influence of the cognac barrels.
Over the years, I've come to realize that tasting whiskey (in a scientific, analytical way) can be a tricky endeavor. The palate is a fickle beast. One day it can love something and the next, not so much. And worst of all, the taste of one whiskey can have a great impact on my opinion of the next whiskey when they are sampled in close proximity. And that seems to be the case with the Reserve and the Cask No. 16. I've had the Cask No. 16 on several occasions, and have always enjoyed it. When I first tasted it tonight, I thought that the cognac cask finish added a new layer of flavor to an already great whisky, making it more well rounded and complex. But after drinking copious amounts of the standard Crown and the Reserve to sort out the differences between the two, the flavors of the Cask No. 16 seemed peculiar and garish. I still rate the Cask No. 16 quite highly, but this experience highlights the need to sample any whiskey with a fresh palate, and to be willing to give a second chance. 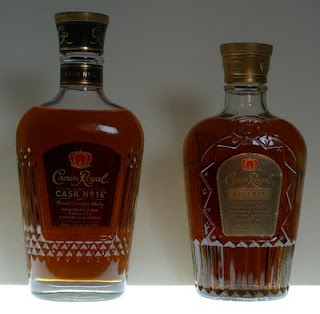 I've come back 24 hours later with a clear mind and palate to revisit the Cask No.16. Tonight I'm finding it to be much more balanced with a nice interplay of the floral, perfume-like notes and the classic spice elements providing great complexity.