Let me start off by saying that I've never been a big fan of Jack. "Too expensive for mixed drinks and not good enough to drink straight" pretty much sums it up. But I have been impressed by some of the higher end offerings from JD, so I thought it would be good to do a comparison of these three. And just for the record, Jack is not Bourbon. Although it meets most of the many requirements that define Bourbon, it is run through sugar maple charcoal before going into barrels. This is considered an added flavor and precludes it from being a Bourbon. It is actually in a separate category of American Whiskey - Tennessee Whiskey (George Dickel is the only other Tennessee Whiskey).

So, on to the tasting. First up, the Old No.7. The aroma smells, well, distinctly like Jack. On the palate it's a little flat up front, with most of the flavor coming on late in the finish. It's a little harsh, perhaps a bit astringent, and at best out of balance. I wouldn't call it awful, but it's just not that great.

Next up, Gentleman Jack. The bottle says "twice mellowed", so I guess that means it gets run through the charcoal twice. I would assume it spends more time in the barrel than the regular JD too, but none of these carry an age statement. Although the flavor profile is very similar to the Old No.7, the flavor comes on a little sooner, making it seem fuller. I would say it is smoother and much better balanced, perhaps with a bit more oak influence. While it might not be my first choice of drink, I could sip on this without complaint.

Last up is the Single Barrel. Single barrel whiskeys are the U.S.'s answer to single malt scotch. With a massive number of barrels aging in warehouses, they are tasted regularly to see how they are maturing. When the master distiller comes across an especially high quality barrel of whiskey, it is set aside, usually aged a bit more than normal, and bottled individually, becoming a single barrel whiskey. When normal whiskeys are bottled, many barrels are first married together, which allows the master distiller to create a final product that tastes consistent from bottle to bottle. With single barrel whiskeys, that consistency is given up for quality. So, the taste of Single Barrel Jack may vary a bit from bottle to bottle. How does it taste, you ask? There's not much aroma (actually that goes for all three of these, maybe it's just the glasses I'm using tonight). Being at a much higher proof than the first two, I'd expect this to have a lot more bite. But it really doesn't, it's just much more full flavored. It has a lot more depth and balance. While it still tastes like Jack, the classic Jack flavors are minimized, and the oak becomes more predominate. This is good quality whiskey and worth seeking out.

I know that I said I wouldn't call the Old No.7 awful a little higher up this page, but after tasting the Single Barrel and going back to it, awful was the first word that popped into my head. And while the Gentleman Jack seems highly refined compared to regular Jack, it is not in the same league as the Single Barrel. 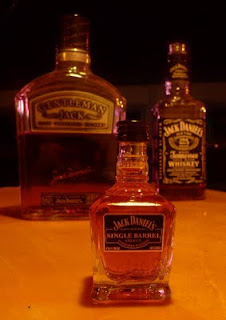