I was really excited when I picked these up, but I was a bit disappointed when I learned that this year’s release was from "rediscovered" barrels, and didn’t actually originate from an experiment. In 1998 Buffalo Trace acquired the Old Charter brand, along with their inventory of 150,000 barrels of aging whiskey. A small number of these barrels were lost in the shuffle, forgotten about, left hiding in a dark corner of one of the massive warehouses until they were recently discovered during an inventory audit. I suppose the “hey, look what we found when we did inventory collection” isn’t very marketable, so I can kind of see why they were included in the experimental collection.

The three bottlings were distilled in 1993, 1991 and 1989, and were bottled at 17 years 7 months, 19 years 1 month, and 21 years 1 month, respectively. In my last post I talked about whiskey evaporating out of the barrel during aging, referred to as “the angel’s share”. What’s really cool about this group of bottles is that they have a lot of technical information printed on their labels, including the percentage of liquid lost to evaporation at the time of bottling. The 1993 lost 43.6%, the 1991 lost 62.1%, and the 1989 lost 75.9%. These numbers help to explain the high prices of older whiskeys.

Okay, these Bourbons didn’t originate as experiments - but they are unusual, have a unique history, and it is uncommon to see Bourbon in this age range. So I am still excited about them.

All three are bottled at 90 proof, and they are the same shade of medium amber, with the older examples maybe each getting just slightly darker.

1993 – The most lively of the three on the nose, but still quite thick and masculine. Surprisingly floral on the palate, with notes of Lavender standing out, and balanced by moderate spice notes.

1991 – Something on the nose reminds me of Play-Doh. The wood flavors become more prominent, with spice and vanilla coming to the fore. The floral notes are still there, but quite subdued.

1989 – The nose is similar to the others, but a bit restrained. Now the wood is starting to dominate on the palate, to the point that even the spice notes give way to hints of pencil shavings and leather.

I like all three of these overall, and each one has a respectably long, engaging finish. I really appreciate the unique flavor profile of the 1993, but the traditionalist in me gives a slight edge to the 1991. The 1989 is quite enjoyable, but just falls a little short of its younger siblings in my opinion. 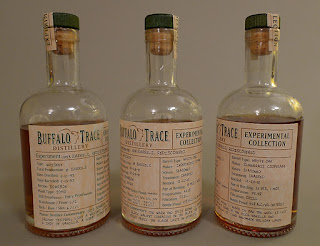