stats: 100% Rye Whiskey (distilled and aged in Canada, bottled in the US), 100 proof, 10 year, $70.
In 2009 Raj Bhakta, an American entrepreneur from Pennsylvania, bought a 500 acre farm in Vermont. He soon realized that the best way to turn a profit was to take the agricultural output of the farm and create a finished product from it which could be sold for a much higher price. Being a whiskey lover, he chose to grow rye on the farm, and distill it into whiskey, with the lofty goal of being a single estate distillery (producing whiskey only from the grain grown on the farm). Shorty after the purchase, Raj was introduce to Dave Pickerell, former Maker's Mark master distiller of 14 years. The two decided to collaborate on the project, and a business partnership was begun. Of course quality whiskey has to age for quite some time, and no one wants to own a business that doesn't sell anything for several years. In this situation, there are two paths that can be taken: start off making unaged products like vodka and gin, or source aged whiskey from larger distillers to sell in the near term. Raj and Dave chose the later, and with Dave's industry connections, he was able to source some fine 100% Rye out of Canada. So, technically this is Canadian Whiskey which is bottled in the US, which brings up an interesting point - the US and Canada have different definitions of Rye Whiskey. By US law, to be called Rye it must have at least 51% Rye in it, but in Canada, a whiskey can have very little Rye, and still legally be called Rye. I don't want to go off on a huge tangent, so I'll follow this post in a few days with one that covers the differences (technical and legal definitions) between American and Canadian Whiskey.
One obvious question is, can you buy this or something like it in Canada? The answer is not really. The 100% Rye from Canada is what they refer to as a flavoring whiskey. A tiny percentage of it is added to the fairly pedestrian base of something like Canadian Club or Crown Royal to give it a backbone of flavor. Sure, the Canadians could sell this on its own, but that's just not what they do. It is simply outside of the range of what they normally sell. The next obvious question is, what is a whistle pig? It's just another name for a groundhog, for a sound it sometimes makes. After an amusing encounter with a Frenchman in Vermont, Raj decided to name his farm and his whiskey after the critter.
Okay, enough of my ramblings, on to the whiskey. Rye is a spicy spirit by nature, and this is a big intense one. Sometimes it's hard for me to identify individual flavors, but most Rye whiskeys have a unique but common profile of spice flavors. Also, a typical Bourbon will have somewhere between 10% and 40% rye, so they can taste similar. But at 100% rye, and 100 proof, the Whistle Pig is all about the Rye flavors. The nose has dry spice notes with floral hints. On the palate it seems mild up front, but don't be fooled, the flavor grows rapidly with an explosion of fiery spice which quickly builds in layers of intensity. The classic rye flavors eventually reache a crescendo of mouth numbing proportions. Then the long finish tapers off pleasantly and slowly. A light floral hint runs through the background. What it lacks in complexity, it makes up for in depth and intensity. 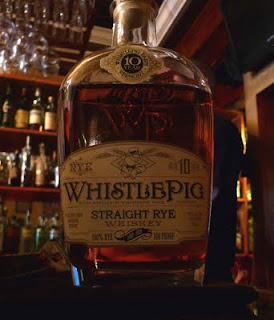