stats: Canadian Club 6 yr - blended Canadian Whisky, 80 proof, $15
Canadian Club 10 yr - blended Canadian Whisky, 80 proof, $17
I know that when I did my Crown Royal roundup a few weeks ago, I said there were no other Canadian whiskies that I really even considered. Most of them get lumped into the unfortunate category of "brown vodka". But in 2008 Canadian Club celebrated its 150th anniversary with a limited release 30 yr old bottling. While it wasn't something that I'd pick up on a whim at $150 a bottle, when Malt Advocate declared it the 2009 Canadian whisky of the year, I certainly took notice. After observing that the standard CC caries an age statement of 6 years, and that a 10 year can be had for just a few dollars more, I decided to give the two a try and see if there was anything here worthy of my attention.
I was pleasantly surprised when I tasted the two. While I certainly wouldn't regard them as great whiskies, they were far better than I expected, especially when you consider their price point. The 10 year is balanced with enticing notes of teaberry and gingerbread and an oaky background. Not a lot of complexity, but still quite pleasant with a respectable finish. The 6 year has a similar flavor profile, but lacks the depth and character of the 10 year. While there's nothing seriously wrong with the 6 year, it just comes across as a meek version of the 10 year. These aren't whiskies that I would get terribly excited about or go out of my way to purchase, but I do have a good bit more respect for them than before this tasting. Given the minimal price difference between the two, I would reach for the 10 year every time.
I've noticed that CC also makes a 12 year and a Sherry Cask version, both of which are in the $20 range. Now I'm very curios to see how those compare to the 10 year. Definitely fodder for a future review. 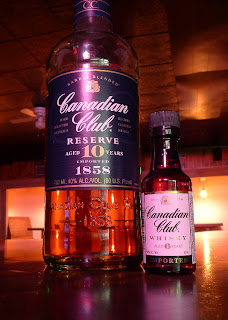