While visiting my parents for the holiday weekend, I came across a few interesting whiskies to taste; a vintage Crown Royal bottle dating back to the early 1980’s, and the Kirkland Signature Blended Canadian Whiskey. You may recall from my Kirkland Signature Bourbon review that it is Costco’s private label brand.

I searched around online quite a bit, but could not come up with a definitive answer for the source of the Kirkland Canadian Whisky. The list of possible answers is not very long though. And only three have a real likelihood of being the source; Canadian Club in Windsor, Ontario, Canadian Mist is Collingwood, Ontario, and Crown Royal in Gimli, Manitoba.

The source might not be disclosed, but the Kirkland label definitely has a very Crown Royal-esque look to it. The purple colorway, the cursive font, the standing lion logos; it’s all too similar for there not to have been a lawsuit if it was done without permission. And I can’t see why Crown Royal would give them permission for such a thing if there wasn’t a deal for the purchase and bottling of whisky between the two.

Of course, that doesn’t mean the Kirkland has to be exactly the same as what goes into a bottle of Crown Royal. Five different whiskies are blended together to make Crown Royal; two base whiskies and three flavoring whiskies. The Kirkland Canadian could certainly be a proprietary blend, using different proportions of the five, or maybe even just three or four of them.

Following up on the Kirkland website, they list the composition for this whisky as 95% corn, 2% rye, 2% barley and 1% sherry. In the greater whisky world, seeing the word “sherry” usually implies sherry cask maturation. But, according to the Canadian regulations, other spirits or wine, up to 9.09% of the total composition, can be added to Canadian whisky. So, in this case it’s likely that they actually do add sherry as a flavoring. Since this whisky is a blend of an unknown number of component whiskies, the formula listed above doesn’t really provide any additional insight as to who the distiller might be.

color – Golden amber.
nose – Clean. Fruit and baked goods, a hint of spice and a bit of a vegetal element.
palate – Sugar cookies, peppermint and subtle teaberry. A little punchy on the mid palate, but not too wild.
finish – Smooth. Warming spice notes, with a biscuit like background and decent length
overall – Approachable. Has the mild-mannered Canadian personality overall, but a decent amount of character for the style. 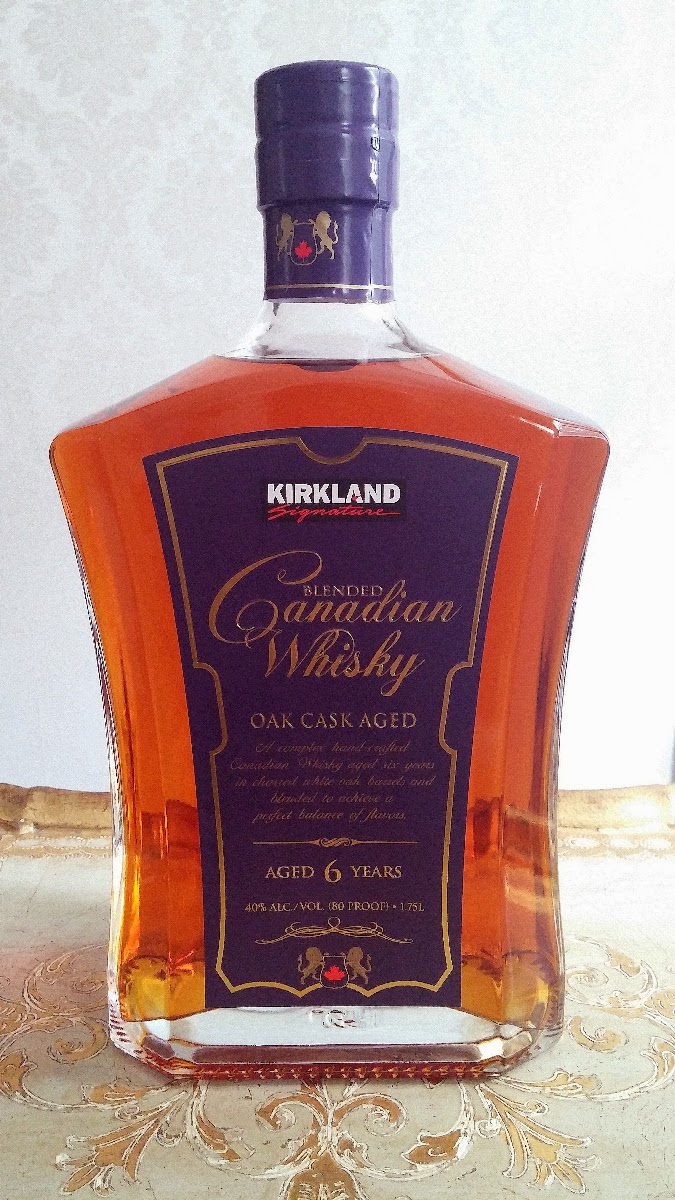 As for the vintage Crown Royal, dating such things can be a little tricky. If you are lucky, a two digit year of manufacture will be stamped in the bottom of the glass bottle. Neither bottle producers nor distillers sit on their inventory of empty bottles for very long, so that number will usually tell you the year that the whisky was bottled. In this case, I only see a “7” and a “6”, but there’s too much space between them for it to be a 76. I’ll have to use some alternative dating methods.

The first two clues tell me that the bottle predates 1990. The alcohol level is shown only as a “proof”, not and “alcohol by volume”. The requirement to have abv shown on the label started right around 1990. Also, there is no government warning on the label; a requirement which went into effect late in 1989.

The next clue is the lack of a UPC code. Their use was slowly phased in during the late 70’s and early 80’s. Looking at the size of the bottle, it is given in metric units. The transition from standard measurements (pint, quart, gallon) began in the late 70’s and was completed by 1980/1981.

The last clue is the tax stamp. Well, there are no tax stamps on this bottle, but looking at pictures of older Crown Royal bottles I saw examples which had two tax stamps crisscrossed over the screw top. Looking at this bottle, I can see adhesive residue on the neck in four spots where tax stamps would have been affixed. The use of tax stamps on liquor bottles was discontinued in 1985.

That means this bottle dates to somewhere between 1980 and 1985, and that makes it interesting for two reasons. First, the early 1980’s were the peak of the whisky glut. The industry overproduced in the 1970’s as sales were falling and they went into the next decade with way too much inventory. That meant that the whisky going into the bottles got older (older than their age statements, or older than they had traditionally been), without prices going up. Second, Crown Royal was still being produced at their Waterloo, Ontario distillery which was lost to fire in 1992. That was in addition to the Gimli, Manitoba plant which continues to operate today.

color – The same golden amber, but a few shades darker.
nose – Sharp. A bit of a chemical-like quality, but there are some more respectable notes behind that (baking pies, subtle middle eastern spices).
palate – More weight. Darker in character. Spiced baked goods (apple pie crust with cinnamon), just enough fruity sweetness to add balance.
finish – Warming and pleasantly spicy, with a tree root-like character to it .
overall – I see a common thread between the two. This one has slightly better continuity and more depth overall. 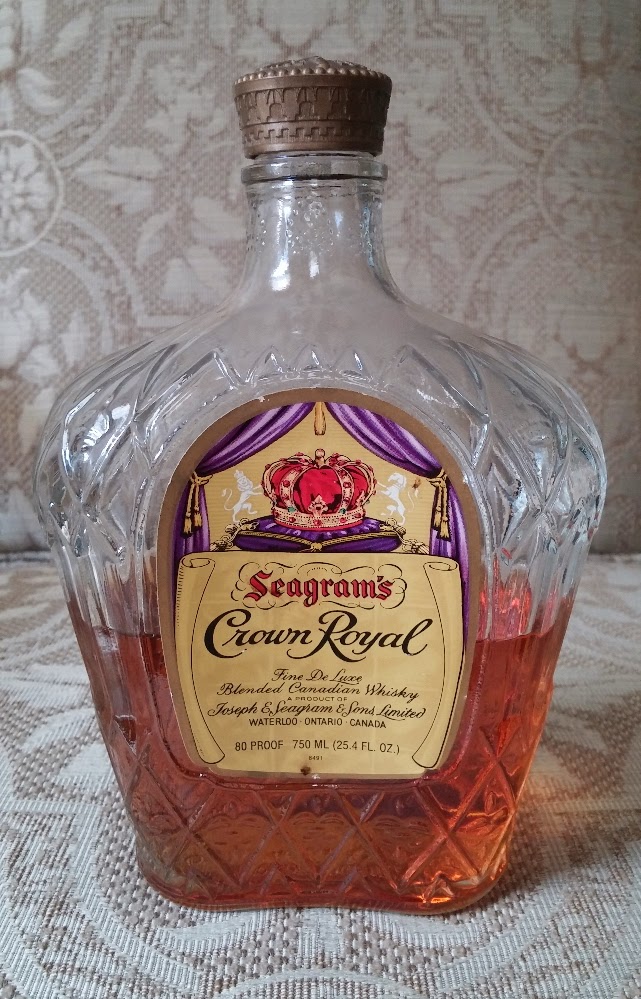 The Kirkland Signature is only available in the 1.75 liter size, so that is the price listed above. For the Crown Royal, I listed the current standard retail price for a 750 ml bottle. The large format Crown bottles run about $46, making the Kirkland Signature a tremendous value. I’ll try to follow up in a few weeks with a recent bottle of Crown Royal to see how it compares.
Posted by VT Mike at 11:27 AM

Just a quick comparison of the early 80's Crown Royal to a more recent bottling (probably purchased within the last five years). The one from the 80's is darker (noticeably, but not dramatically) with more of an amber hue. They have similar flavor profiles, but the newer version is a little thin, coming off slightly hot and just a little out of balance. The older one has more depth with richer flavors. It definitely seems to be more mature and more well-composed. Dusty Hunters spend a lot of time seeking out these early 80's glut whiskies for good reason.

Ooops, I forgot to mention the aromas. The 80's bottling has a nice balance of oak, leather and spice. Those aromatic notes are weaker on the newer bottling and they are pushed aside by an aroma similar to isopropyl alcohol.

Great review and thank you!

I love the research. I'm not a fan of paying for marketing and prefer the quality of private label without the fanfare of advertising.

Hopefully, Costco returns the favor to you.

I have read that the Costco buyers are a key component to the success of the brand; seeing as exclusives like these are encouragement for the membership fee of pure profit.

Thanks for a nice review. I am going to try a bottle of the Kirland Canadian wiskey.
I hope you and your dad had a pleasant evening together doing taste testing.
Bob in Minnesota

I was just in the Costco in Indianapolis and the employee who actually stocking the liquor aisle told me that the Kirkland Canadian Whiskey was actually purchased from none other than Crown Royal itself. The reason for the extremely low price is all related to marketing expenses for the "Crown Royal" label. He explained that Crown Royal probably profits the exact amount for each bottle they sell and it is exclusive to Kirkland brand. He also said if you do not think it taste the same you can return the bottle to Costco no questions asked. Hope this helps...

Actually, at the Costco I shop at, in Edmonton, Alberta, the unit cost of the Kirkland Canadian Whiskey is slightly higher than their unit cost for Crown Royal. Good tasting whiskey, all the same.

I had an older crown with a similar bottle though it was a Canadian bottle from Ontario. Previously all bottles had paper seals and the bottle that I had had a seal with 1979 on the bottle. It was finished off at New Year's! Definitely a great whiskey and it was a shame to hear that the bottle had been thrown out after the party.

Thanks for the great article. Recently Costco discontinued their Kirkland Canadian Whiskey (confirmed by email with Costco). Have you, by chance, been able to determine which manufacturer makes this whiskey? I'd like to contact them to see if they sell it under any other labels. It's half the cost of Crown and my husband, who used to only drink Crown, will drink the Kirkland brand.

The Costco rep did say she forwarded my email to the correct department to see if they would consider reintroducing the whiskey, so I have my fingers crossed.