I feel mildly guilty about the fact that I’ve been writing a whisk(e)y blog for nearly three years without a single mention of Irish Whiskey. I wanted to start off with a thorough historical background of the country’s whiskey industry, but the topic has been perpetually stuck on the back burner.

Then, about a month ago I got an email from a PR rep letting me know that Powers Gold Label was being re-launched with new packaging, a higher proof, and the elimination of chill filtering. Along with that info was an offer for a sample bottle. Now a free bottle of whiskey will never buy my opinion, but it will move you to the front of the queue of topics I’m planning to write about.

When it comes to Irish Whiskey, Jameson rules the world, at least in terms of sales volume and shelf presence. Bushmills and Tullamore Dew are both significant players, but basically tie for a distant second. All of the other Irish brands are left to fight for scraps. Quality however does not always go hand in hand with popularity, and Powers is a fine example of that axiom.

Case in point:
A bar that I used to work at had a bottle of Powers on the shelf on a fairly regular basis. One day a guy from Ireland walked in and upon seeing it he said “You’ve got the Powers?” in a tone of disbelief. A moment later he followed that with “Oh bloody hell, they’re not supposed to let that out of the country.”

Since I already had a fairly favorable opinion of Powers, I was pretty excited to hear that they were raising the proof and doing away with chill-filtration; these are almost always beneficial changes. This wasn’t the only change to the Powers lineup that was being announced though, and it took me some time to cut through the fluff of the press releases and get a clear picture of what was going on.

I do need to clarify some definitions that really only apply to Irish whiskey first though. Like with Scotch Whisky, Ireland has malt whiskey (which is distilled in pot stills only from malted barley) and grain whisky (which is distilled in column stills, usually to a relatively high proof, and usually from grains other than barley). When the two are mixed together the result is blended whiskey. But there is a third type of whiskey that is unique to Ireland. Traditionally it was called “pure pot still whisky” and sometimes “Irish pot still whiskey”, however in recent years these terms have given way to the name “single pot still whiskey”. Whichever name it goes by, it is whiskey that is distilled in post stills and made from a mix of malted and unmalted barley.

Blended Irish whiskey can be made by mixing grain whiskey with either malt whiskey or pure pot still whiskey, and there is no requirement to make any differentiation on the label (beyond having the word “blend” present). Pure pot still Irish Whiskey bottlings were historically plentiful, but until making a recent comeback the style had all but died with just Redbreast and Green Spot remaining in regular production.

Going back just a year, the Powers lineup consisted of two bottlings: The standard Gold Label priced at $20 and the Gold Label Special Reserve 12 Year priced at $40. Both were blends bottled at 40% abv. Then, in the spring of 2013, Powers introduced their new John’s Lane Release. This bottling is a single pot still whiskey with a 12 year age statement, at 46% abv, non-chill filtered and priced at $70. Around the same time Powers Gold Label Special Reserve 12 Year was discontinued.

Fast forward to December of 2013 and we get two more bottlings from Powers. First the standard Gold Label was re-launched with updated packaging, non-chill filtration, a bump in strength to 43.2% abv, and a bump in price to $25. At the same time Powers announced the new Signature Release, a single pot still whiskey with no age statement, at 46% abv, non-chill filtered, and neatly filling the price gap at $45.

Wanting to do a direct comparison and assuming that time was of the essence, I convinced a local pub to let me smuggle in my sample bottle so I could have a head-to-head tasting with the older bottle of Powers Gold Label that they had on the shelf.

Powers Gold Label 80.0 proof
color - golden amber
nose - subtle but pleasant, malty grain and clay-like soil
palate - good mouth-feel, slightly sweet with grain and honeyed tree fruits
finish - clean, warming, gets a little hot as the flavors fade, but in a good way
overall - not terribly complex, but balanced and enjoyable. the late heat adds some backbone and keeps it from falling flat as the flavors fade 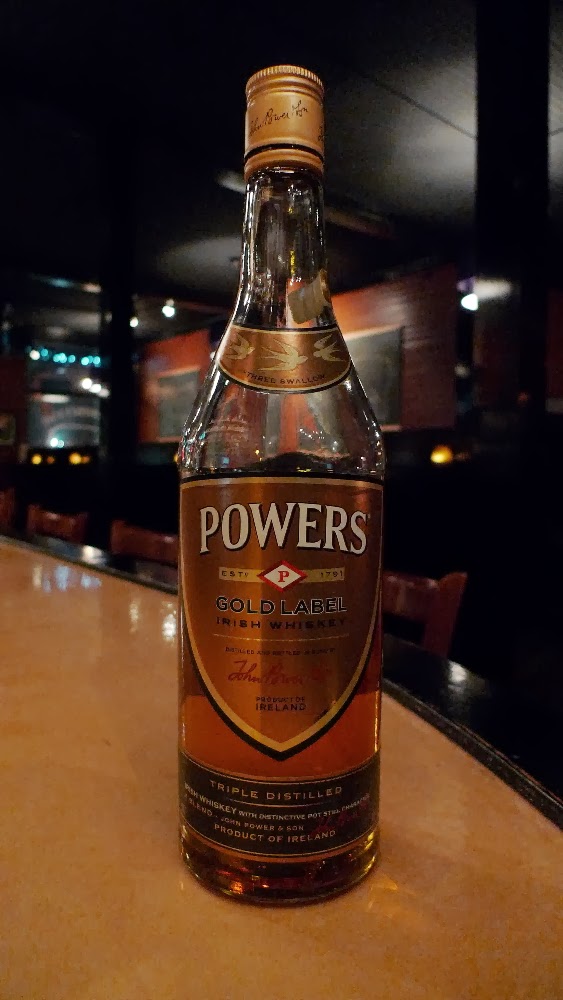 Powers Gold Label 86.4 proof
color - maybe a touch darker, but I’d be lying if I said I could see a difference between the two
nose - surprisingly less aromatic than the 80 proof. very little there, but it seems more fruit forward

palate - no more viscous than the 80 proof but the flavors are quite a bit different. slightly floral and more berry fruit than tree fruitfinish - the heat is still there but the flavors hang on a lot longer and are joined by some spicyness, adding a bit of complexity
overall - greater intensity in general (both flavor and heat, but a warming spicyness on the finish is especially noticeable). good balance. still not super complex but it has a lot more going on with the fruit flavors and spicyness carrying much further into the finish. 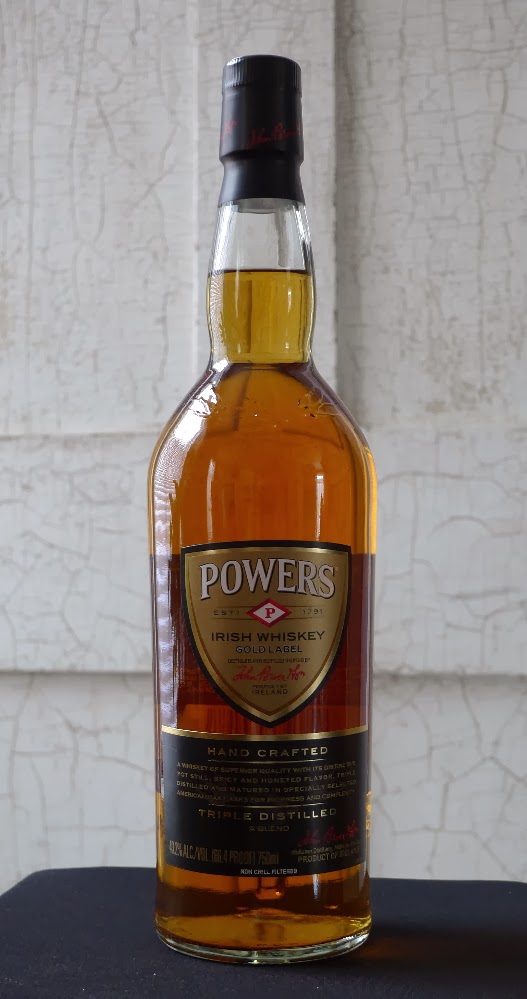 Chill filtration strips out congeners (esters, fatty acids, aldehydes and higher alcohols) to keep the whisky from turning cloudy at lower temperatures. Of course this can strip out flavor and body as well. Some of these congeners are soluble in alcohol but will precipitate out at lower temperatures, so most non-chill filtered whiskeys are bottled at 46% abv or higher to allow the consumer to add a little cool water without the whiskey going cloudy. In the case of Powers Gold Label we’re dealing with a blend, so the grain component is distilled in a column still (likely to a relatively high abv) and in this case the pot still component (be it malt whiskey or pure pot still whiskey) is triple distilled. Both of these factors result in a higher level of refinement compared to a typical double distilled single malt. This translates to fewer congeners making it through the distillation in the first place, and is why Powers can get away with bottling the Gold Label non-chill filtered at 43.2% abv.

I’ll be honest; I went into this tasting expecting the difference between these two whiskeys to be quite minimal. Considering the information in the above paragraph, I was surprised to see as much of a difference between the two bottlings as I did. The lack of aromas in the new bottling is a complete mystery to me though. From the research I have done it sounds like chill filtration should reduce aromatics, completely the opposite of what I experienced here.

I enjoyed both examples, but I would say the new offering is an improvement, and one that is roughly commensurate with the price increase. I’m going to make sure I hold back some of my sample bottle so I can throw it in the ring when I eventually get around to comparing the flagship offerings from Jameson and Bushmills.
Posted by VT Mike at 5:39 PM