The Scotch Whisky industry is steeped in tradition, and its distillers work very hard to put out a product that is consistent from bottle to bottle. In spite of this, we are dealing with a dynamic commodity and it is inevitable that single malt flavor profiles will evolve over longer time spans.

I started to explore this topic in the last post with an examination of how Lagavulin’s stills have changed in shape and size throughout the lifespan of the distillery. This time around I’m going to examine several of the other factors that have led to the changes in the way single malts taste over the last 50 years. Some of these changes are the result of consumer demand and others have happened in the name of modernization and increased efficiency, but either way their examples are numerous.

The most recent change started roughly 10 to 15 years ago. This one, initiated at the behest of more sophisticated consumers, is the move away from chill-filtration. This change is often accompanied by an increase in alcohol level, as the unfiltered whisky can go cloudy with just the addition of a bit of cool water if it is bottled below 46% abv. Bunnahabhain made the leap in 2010, doing away with the process across their line and increasing from 43% to 46.3% abv. The whisky was transformed and much for the better, say I.

Concurrently, many distillers have done away with the use of caramel coloring. Most claimed it was used in trace amounts to ensure color consistency, but I suspect some used heavier doses to attain a darker tone that they thought would be more appealing to consumers. Those who employed artificial coloring all claimed it had no effect on flavor, but many whisky writers and critics have argued otherwise. I feel that this “industry pressure” is largely responsible for the current decline we see in the use of caramel coloring.

Over the last five decades, with the growth of the Bourbon industry and the dwindling popularity of Sherry, Scottish distillers have experienced an evolution of the types of casks that are available to them. While Bourbon barrels now abound, Sherry casks are several times more expensive and difficult to come by in quantity with any likelihood of consistent quality. This has resulted in many a distiller slowly and quietly transitioning from Sherry oak to Bourbon oak. I have seen speculation that Cragganmore is a very likely candidate for this phenomenon.

As the production levels of single malts have grown, warehouse capacity has had to increase as well. Many of the bigger companies that own multiple distilleries have gone the route of developing large, centralized warehouse complexes, typically in the same locations as their blending and bottling facilities. It has been argued that this can erode a distillery’s individual character, as the local climate no longer has an influence on the whisky through its many years of aging in the cask.

Looking back to the 1960’s, this seems to have been the most transformative of the past five decades. Not only was this a time of rapid modernization and consolidation, but also of changing consumer tastes. Most distillers made the move from direct-fired stills (traditionally coal fueled, but the few remaining now use natural gas or oil) to indirect-fired (utilizing internal steam coils). The fact that Glenfarclas tested indirect heating on one of their stills in 1980, then switched it back to direct heating just three weeks later certainly shows the significance of the change.

Whether or not the move from traditional wooden washbacks (fermentation tanks) to their lower maintenance stainless steel counterparts has an effect on the flavor of the whisky is highly debatable. But the shortening of fermentation times from upwards of a week to a mere two or three days (many distilleries have done this to increase capacity without adding infrastructure) has resulted in spirit that is noticeably less fruity.

Also, the switch by most producers from traditional worm tubs to modern shell-and-tube condensers has had the effect of a decidedly less heavy spirit being produced.

However, the most significant change of the 1960’s was when most distilleries gave up their traditional floor maltings and began to purchase barley malted to order, which was now available from several modern, industrial facilities. A change in flavor could easily be introduced by switching to commercially produced malt. The types of organic material that peat is composed of can vary greatly as you move around Scotland. The peat that is local to a distillery (along with the source water) would make a unique contribution to the distillery’s flavor profile, and this could be lost when the malting process was outsourced.

More importantly, this transition ushered in an era of changing peat levels. Since the local availability of peat (or coal) was no longer a factor, it was much easier for distillers to adjust their peating levels. And that is just what happened with consumer demand trending toward a lighter, gentler style of whisky at the time. Traditionally every distiller on Islay made heavily peated malt whisky. Bruichladdich changed over to being very lightly peated in 1960, and three years later Bunnahabhain followed suit. Then, in the early 1970’s, Bowmore reduced the peatiness of their whisky to what is generally considered a moderate level.

I have recently become fascinated with the story of a distillery where the peat levels have changed many times over the last 50 years. Most Highland distillers slowly drifted away from using healthy doses of peat long ago (I’m guessing this trend started in the late1800’s as the newly built railroads made it possible to transport coal to remote areas). Glen Garioch, pronounced glen geery, was still hanging on to this nearly forgotten tradition, as well as using its old floor maltings, when it closed due to the lack of a reliable water source in 1968.

Glen Garioch was purchased by Morrison Bowmore in 1970, and after a more dependable water source was secured, it was finally reopened in 1973. At that time a new maltster was brought in and, having been trained on Islay, he actually increased the peat levels. For many years the standard lineup of Glen Garioch had a 21 year old and I’ve read accounts of it becoming noticeably smokier in the mid 1990’s.

While there is no clear record of the exact peating levels used at Glen Garioch, and I even came across a report of it supposedly varying quite a bit from batch to batch at one point, it clearly decreased over the ensuing two decades and it sounds like there were significant drops in 1975 and 1985. The distillery closed again from mid 1995 to mid 1997, and that event marked the end of the use of Glen Garioch’s old traditional floor maltings. Since reopening, the distillery has been purchasing unpeated, commercially malted barely.

In 2009 Glen Garioch single malt was relaunched with a completely revamped lineup. In addition to the new 12 year and no-age-statement Founder’s Reserve, there have been several vintage dated small batch editions released. So far they have spanned from 1978 to 1997, covering a broad range peat levels.

Today I’m tasting the 1994 Vintage, which spent 17 years in bourbon barrels before being bottled in 2011 at a cask strength of 53.9% abv. This is some of the last of the peated Glen Garioch that was produced. 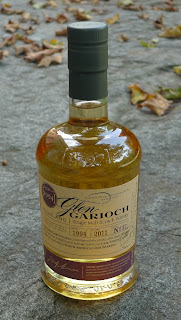 The color is a light golden amber.
The nose is fairly intense, but not heavy, with grassy, hay-like notes mixing in with gentle floral, earthy and malty aromas. If there is any peat evident on the nose, it is masquerading as the earthiness.
In the mouth the body is quite heavy and the whisky is exceptionally full flavored up front. The flavors, which are primarily malt and toffee, with hints of mulling spices and grassy / floral notes, evolve and recede as the high alcohol level becomes prominent on the warm, peppery finish. The peat notes are absent up front, but come in subtly on the back end, tying everything together very nicely. There’s quite a bit of length at the finish, and even though the warmth of the alcohol plays a lead role, just enough flavor rides along to keep it in check.

Although it has some flavor elements that deviate from my personal preferences, I still found this whisky to be quite enjoyable. In and ideal world I would have three more bottles in front of me: the 1997 Vintage to try an unpeated version (even though I don’t think I would like it as much), the 1990 Vintage which has the added element of some sherry cask whisky, and the 1978 Vintage to experience some of the more heavily peated Glen Garioch.

Looking back, much of the modernization that has taken place in the industry since 1960 has helped Scottish distillers to cut costs and produce whisky that is more consistent from batch to batch (though many would argue it is not of the same quality). But after examining all of the flavor altering changes that distillery managers have employed over the years, it almost seems silly that they would have the dents of a decommissioned still recreated on its replacement, as I discussed in the Lagavulin post.
Posted by VT Mike at 2:49 PM