I’ve been spending a good bit of time on the discussion forum of straightbourbon.com lately, sometimes participating and other times just doing research for blog posts. As one would imagine, most of the topics there revolve around American whiskey. But there’s a decent amount of general whiskey talk happening there as well.

One recent thread that caught my attention was titled “Threshold for cracking open a special bottle”. While there were a few people who noted special occasions such as the birth of a child or a 50th birthday as the motivation to open one of their most prized bottles, the general consensus was that merely being in possession of an extraordinary bottle was reason enough to break the seal.

The group of people represented in that discussion had a few serious collectors and a few people who never keep more than a few bottles on hand, but I think most of the participants shared my situation; we buy bottles faster than we drink them and end up with a collection even though we would not consider ourselves collectors per se.

In this case it is normal to delay opening a newly acquired bottle simply because one already has too many open bottles. I find myself sitting on more and more unopened bottles these days as I try to push through some of the ones I opened years ago.

The whole conversation got me looking over my collection (the unopened ones anyway) and the standout was the bottle I was given upon graduating from the Springbank Whisky School. It’s been a year since my epic journey to Scotland and I’ve definitely been feeling nostalgic about the trip lately. In spite of my disinclination to commemorate significant events by opening special bottles, I decided that it would perfectly appropriate to crack open my graduation bottle on the one year anniversary of having received it.

Being the diligent blogger that I am, I committed myself to getting some background information on the whisky itself. I remember Frank McHardy (Springbank’s Director of Production) being a little cagey when pressed for details about the whisky at the graduation ceremony, only noting that it was a vatting of whiskies ranging from 10 years to 18 years.

I sent an email off to Janet Blair (Springbank’s PR person, among other duties), and she said she’d look into it. I didn’t hear back for a few weeks so I sent a follow-up email. She emailed me back with the unfortunate news that Gavin McLachlan (the Distillery Manager) only said that it was “special” and wouldn’t give up any details. At her suggestion I emailed Gavin directly. It’s been about four days now and no response so far.

I have to say that Whisky School was a wonderful experience, but after receiving a special bottle to commemorate such a momentous event it is massively disappointing to be unable to elicit even the most basic of details about the whisky.

Now I’m left to speculate and theorize as to the origins of the graduation whisky. First I poked around online to see if I could learn anything. I wasn’t too hopeful as there aren’t many of these bottles out there, but I did find three Whisky School bottle images: one from 2008 at 57.0% abv, one from 2010 where the abv is hard to read but it looks like it starts with 47 and another from 2012 at 48.4%, the same as the one I have. So it does appear that they make a unique bottling each year.

48.4% abv, that’s kind of an unusual number. Most of the official distillery bottlings from Springbank’s standard lineup are at 46%. They do plenty of single cask bottlings as well, but those are always (as far as I know) at cask strength, which generally falls in the range of the low 50’s to the high 50’s. The only recent exception that I noticed was Springbank Rundlets and Kilderkins (those are small casks, in the 60 liter to 80 liter range) which was at 49.4%, but that carried an age statement of 10 years, so I don’t think there is any connection.

One thing I remembered from Whisky School was that for a normal bottling run a group of casks, maybe up to a dozen, wound be dumped into a large tank and enough water adding to bring it down to roughly 48% abv. After a good mixing it is put back into casks to rest, but not the same ones. The whisky now resides in very old casks that have been used for many years and will simply act as neutral vessels. This step lasts somewhere in the range of a few weeks to a few months and allows all of the flavors to meld together ensuring a consistent product. Bigger operations have a large number of tanks so the whisky can stay in one until it is ready for bottling, there are no such luxuries at Springbank.

The group mingled of casks will be brought back out to the bottling hall when they are ready and dumped into another tank. Now precise measurements will be taken and water added to bring the whisky down to 46% abv before it makes its way into the bottles. It is done this way because most of the water needs to be added before the resting stage, but the abv may change once it is back in casks, so they leave a little water to be added at the end. This is when the abv number has to be accurate; there are government mandated regulations that give little tolerance between the actual percentage of alcohol and that which is listed on the label.

But these bottling runs are usually for a set number of cases and the amount of whisky coming out of the group of casks that were pulled is unlikely to match up. We were told that the excess whisky from a run would go back in a cask and be held for the next run of the same type of whisky. I actually don’t remember if that surplus whisky was set aside when it was at exactly 46% or at 48-ish percent, but the 48.4% abv of my bottle got me to thinking; maybe this is the extra whisky from a group of casks that had gone through the resting phase.

The most likely candidate would be Springbank CV, as it is already a vatting of several cask types and ages. Luckily I have a bottle of Springbank CV to compare. But there was no need to even open it, the colors are so dramatically different (the CV is light the graduation whisky is very dark) that there is no way they are of the same ilk.

As I pored over online databases of Springbank single malt bottlings looking for clues I noticed a few things. The distillery puts out a lot more single cask bottlings than I realized. A quartet of 14 year old Springbanks, each from a different type of sherry cask, came to the U.S. this year. There are several single cask Springbank Society bottlings each year. I’ve seen a 2009 Amontillado Sherry butt bottle on a store shelf. I also found reference to a 13 year old single bourbon barrel bottling that was exclusive to the Belgian market. Oh, and K&L wines in California recently had a Springbank Madeira cask bottled just for them. Those are just a few examples.

As I was looking through all of the information, I realized that the single cask bottlings that had production quantities listed were all in multiple of 6. This makes sense; most whisky is packaged in cases of six bottles. These cases are neatly packed on palates for shipping. They are not going to send out 50 cases and two loose bottles.

So, that brought me to my final theory. There must be some leftover whisky from each single cask bottling, could the Whisky School bottling be a bunch of “leftovers” all vatted together? Well, I’ll have to work through some math to see if this is even reasonable. There were 10 sessions of school in 2012, each with six students. That means there were 60 bottles, each at 48.4% abv. All of the single cask Springbanks seem to be at cask strength, typically between 50% and 60%, so I’m going to say they are at 55% on average.

The majority of their single cask offerings come from casks that previously held sherry, port, Madeira, red wine, etc. That would explain the exceptionally dark color of this whisky. Of course this is all just a hypothesis based on my observations and I could be completely wrong. Either way, it’s time to stop thinking and start drinking.

* You may have noticed the star next to the price of this bottle up top. The only way to get one is to attend the Whisky School, so that price includes tuition, lodging and three meals a day for five days. 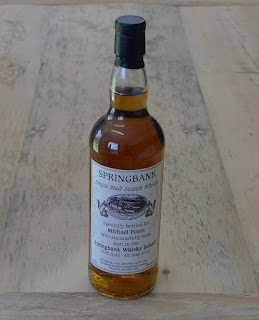 The color is a dark golden amber. The nose is fairly unique. It has a typical Springbank characteristic, but there is something more to it. I find the aromas to be approachable yet intriguing; they carry a certain breadth and density. The liquid is fairly viscous on the tongue. It almost seems meek right up front, but the flavors and intensity build quickly.
A lot of dark flavors are in the mix: raisins, dried figs and molasses to name a few. This range integrates nicely with the underlying fruit notes and dry spiciness that builds as it moves into the lengthy finish. The peat smoke that is a normal (although not major) contributor to the Springbank flavor profile is very restrained in this example. The whisky is well behaved, with smooth transitions and no off-notes; a complex single malt that begs contemplation (I think I have more than obliged).

Gavin is right, it is special; I just wish someone would tell me what it is that makes it so special. I imagine that anyone who is willing to travel great distances and make the effort to see the innermost workings of their favorite distillery would feel the same way.
Posted by VT Mike at 11:25 PM

I'm going to Whisky School next week, I'll be there for Open Day. I'll try to remember to run your theory by Gavin/Frank. Good detective work!