I’ve covered quite a few Japanese whiskies over the past 5 months and they have all been products of Suntory, the only company in Japan that was exporting whisky to the United States. Back in April of 2010, I ventured up to Montreal to check out a few whisky bars. As I scanned the list at my first destination, something jumped out at me – a Nikka Yoichi single malt (I can’t remember if it was a 10 year or a 12 year). Nikka whiskies weren’t available in the U.S., but apparently they were in Canada.

Obviously that was my first drink of the night. At this point, I only remember my general impression of it – it was pretty good, and showing plenty of promise, but at the same time it was kind of rough around the edges with a little too much heat overshadowing its positive attributes.

Almost 2 years later I learned that retail liquor sales in Quebec were controlled by the provincial government – essentially the same way that Vermont and New Hampshire (among others) are liquor control states, except the entire province was run as one big unit. I’m not really a fan of such systems as I feel that industries are better managed by private businesses rather than governments. But there is an upside in this case; inventory numbers are available online, by store and updated daily (New Hampshire does this as well). Search their web site for the alcoholic beverage of your choice and you can see which stores have it in stock, as well as how many bottles are at each location.

My excitement about this new resource was slightly dampened as I looked over the pricing of what was available; it was pretty much all more expensive that the domestic price levels I was used to. Strangely though, there didn’t seem to be a direct correlation between the prices here and the prices there. Some whiskies were just a little more expensive (5% to 10%), while others literally cost twice as much. Smuggling whisky across the border wasn’t going to be a concern of mine. But what I was after wasn’t something I could get in the States - Nikka whisky.

Searching the SAQ website, I was disappointed by the absence of any Yoichi single malts. But there was still something from Nikka, the 12 yr Taketsuru pure malt. It didn’t take me long to head  north and retrieve a bottle. Around that time, I had decided that my whisky collection was getting a little out of hand. I knew I didn’t have the will power to stop buying whisky, so I imposed a moratorium on opening new bottles. The only exception I would make was if I needed to open something to write about it.

Then I went to Scotland and added many more bottles to my collection. Needless to say, the Nikka Taketsuru sat in the corner collecting dust with a few other special bottles. Then last week, as I was thumbing through the new issue of Whisky Advocate magazine, there it was; a review of Taketsuru 12 yr, along with the news that it and Yoichi 15 yr had landed in the States. Well, time to crack open my bottle and start writing.

Pure malt is a term that has gone out of fashion in Scotland. Actually, it was legally banned by the Scotch Whisky Association in 2009, along with the term vatted malt. Both had historically been used to identify whisky comprised only of single malts, but from more than one distillery. They were superseded by a new term, blended malt. I’ll go into a little more detail about the circumstances that prompted that change in my next post. For now, I’ll just say that the new terminology was not universally embraced, and many in the industry feel that it causes more problems than it solves.

Thankfully the Japanese have had the good sense to continue calling a pure malt a pure malt. And that is just what we have here, a marriage of single malts from the two Nikka distilleries, Yoichi and Miyagikyo.

The price listed at the top of this post is the suggested selling price for a 750ml bottle in the U.S. The bottle that I have is 660ml and I paid about $82 (the American and Canadian dollars were essentially on par at the time). 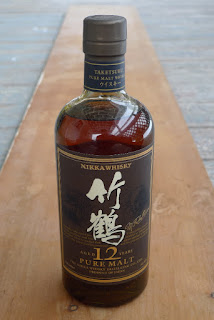 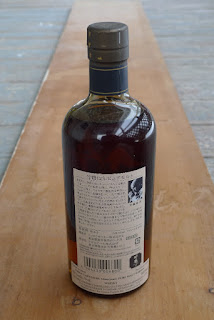 The color is a medium brownish amber. It looked a lot darker in the bottle, and just before opening, I realized that the glass has a significant tint to it. The nose is full, but not overly dense or aggressive. Malty grain and biscuit notes come through, possibly with just a hint of vanilla. Medium to full bodied. There’s an underlying sweetness on the palate. It seems delicate up front, but the flavors quickly build, with just enough heat to add balance. Malty, floral and nutty oak elements work in harmony. As it moves through the finish, some vegetal/ammonia flavors come to the fore. They are not strong enough to be a critical flaw, more of a minor detraction.

My fascination with Japanese whisky continues. Hunting down a 15 yr Yoichi should be a simple matter now. Finding someone to fetch me a bottle of Miyagikyo from Japan on the other hand………
Posted by VT Mike at 5:18 AM

I just noticed this one in my local shop as well. I can't recall the price, but I think it was substantially less than $82.

I'm intrigued, but not quite ready to shell out the money without tasting first!

I actually just came across the receipt for this while looking through my filing cabinet today. I paid $72 (Canadian) and the exchange rate put it at $76. That was a little over a year ago. The current price listed on the SAQ website is $82. But like I said, whisky generally seems to be quite a bit more expensive north of the border.