My little stash of oak aged beers is down to just two; their origins may straddle the Atlantic, but they share a common thread. The two beers are Damon from Hill Farmstead and Viola Sofia from Grassroots Brewing. To understand the connection will take a brief history lesson.

Over the last two and a half years Shaun Hill has emerged from the rural Northeast Kingdom of Vermont as a preeminent craft brewer in the United States. But his rise to glory was preceded by a long personal journey of introspection, philosophy, and international exploration.

A high school science project would provide his first brewing experience and he went on to start a home-brewing club while attending college in Boston and studying as a philosophy major. After moving back to Vermont for a teaching job, he picked up part time work as a keg washer at the (now defunct) Shed brewpub in Stowe. This eventually led to Shaun taking the head brewer position at the Shed, where he was given a good bit of creative freedom and started to make a name for himself. He held that position for two years before going to Trout River Brewing, where a gained more production experience for the next year.

Inspired to eventually start his own brewery during his last year of college, Shaun began to develop a plan to turn his vision into reality on the old family farmstead in Greensboro VT. His original idea was to lease a small facility in a nearby town and operate Grassroots Brewing there. Once that operation was profitable enough, he would rebuild a barn that burnt down on the family property in 1978 and use that space to setup Hill Farmstead Brewery, either with the equipment from Grassroots, or possibly keeping the Grassroots facility in operation, and running the two brands simultaneously.

But 2008/2009 brought about some significant changes in his plan. The reputation he built and the connections he made during his time at The Shed and Trout River led to an opportunity for Shaun to go to Denmark and be the guest head Brewer at Norrebro, a microbrewery and restaurant in Copenhagen. During his 20 month stint there, from March 2008 through November 2009, Shaun expanded his sphere of contacts and friends within the industry, as well as his reputation. He also set up the oak aging program at Norrebro, and three of the beers that resulted from that effort ended up winning medals (2 gold, 1 silver) in the 2010 World Beer Cup in Chicago.

While in Europe, Shaun’s future plans went through a metamorphosis. He had established an industry network with enough depth that he was able to raise the capital necessary to start a brewery on the land that had been in his family since the late 1700’s, with the intermediate step of setting up the Grassroots Brewery no longer being necessary.

And then came another opportunity, Fano Bryghus. The Fano Brewery, located on the opposite side of Denmark from Coppenhagen, was established in 2006 but operated for only 2 years before going bankrupt. After lying dormant for 6 months, the facility was purchased by Norrebro, and Shaun found himself splitting his duties between the two breweries. It was here that the Grassroots brand took on a new life, as Shaun began brewing his own beers under that label in the Fano Brewery. It would become Shaun’s European brand, brewed under contract (by him at first, and for him after he returned to the US) at Fano.

On to the beers. Viola Sofia is an Imperial Stout that was aged for 3 months on top of cocoa nibs in Jack Daniel’s barrels. It was brewed to celebrate the birth of a close friend’s daughter, whom the beer is named after. Damon is an Imperial Stout brewed in honor of his family’s Black Lab (1993 – 2004). I’m sampling the 2011 release which was aged in Blanton’s Bourbon barrels for 8 months. Future releases of Damon will spend time in a variety of barrels (wine, port, multiple bourbon brands, etc) which will be bottled separately. 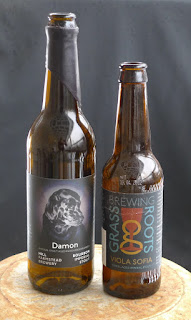 Viola Sofia
visually, both beers are black and essentially opaque.
nose: wood and chocolate, but somewhat restrained, especially compared to Damon.
palate: thick in the mouth with plenty of body. the roasted malty sweetness up front is quickly reigned in by a balancing bitter component (I’m assuming from both hops and the cocoa nibs). a wave of chocolate flavors builds to a crescendo on the mid-palate, only to be cast aside by the bitterness which eventually dominates and then gently fades through the incredibly long finish.
overall: great depth with an entertaining evolution of flavors.

Damon
nose: dense and thick, dark and sweet
palate: viscous, syrup-like body. while there is a decent amount of complexity, the sweetness is an overriding theme. richly toasted malt, vanilla and dark chocolate sauce are interlaced with subtle oak notes, and these flavors dominate until a mild wave of bitterness comes to the fore late on the finish.
overall: well made, but a little more sweetness than I prefer. this is a pretty big contrast to the Viola Sofia, which brings more depth and balance to the table with its edgy bitterness.
Posted by VT Mike at 5:15 PM