stats:
Old Grand Dad, Kentucky Straight Bourbon, 86 proof, no age statement, $15
Old Grand Dad Bonded, Kentucky Straight Bourbon, 100 proof, no age statement, $17
Old Grand Dad 114, Kentucky Straight Bourbon, 114 proof, no age statement, $23
As I mentioned recently, the American whiskey industry has been on a path of steady growth for the past three decades. Much of this growth has been fueled by the interest generated from an ever increasing number of specialty bottlings and limited edition releases.
The 1984 release of Blanton’s, the first single barrel bourbon, got the ball rolling. That momentum was built on when Jim Beam released a series of small batch bourbons between 1988 and 1992, consisting of Knob Creek, Booker’s, Baker’s and Basil Hayden’s. 1990 saw the introduction of the Buffalo Trace Antique Collection, which brought about the phenomenon of limited annual release whiskeys that are highly sought after and only available for a short period of time each year. More recent additions to this trend include bottlings that change each year, such as the Buffalo Trace Experimental Collection, the Woodford Reserve Master’s Collection and the Old Forrester Birthday Bourbon series.
However, with this growth has come a new generation of consumers. Many of those who have been drawn in by the hype and media attention surrounding the rare and unique offerings end up being interested in little else. They ignore the distiller’s “everyday drinker” flagship whiskeys, while they hunt down oddities like the Buffalo Trace’s Single Oak Project or the Pappy Van Winkle Family Reserve bourbons, which enjoy a cult-like status.
Admittedly, I followed I similar path when I got into bourbon 10 years ago, with Maker’s Mark and Knob Creek sparking my interest, and a few years later Old Rip Van Winkle 10yr 107 proof opening my eyes to the fact that there was a whole world of great bourbon out there. Fortunately, I eventually came around to discovering the gems that were hiding in plain sight (and modest price ranges), such as Wild Turkey 101 and Old Weller Antique 107.
Still, I find it a bit bothersome that there are people who will scoff at the mere mention of Old Grand Dad (likely without ever having tasted it), but will wax poetic about the virtues of Basil Hayden’s, all the while being completely ignorant to the fact that Basil Hayden is Old Grand Dad, both in name and spirit.
When Raymond Hayden built a new distillery in 1882, he named it Old Grand Dad to honor the distilling tradition of his grandfather, Basil Hayden. The brand has changed hands many times over the last 130 years, and has been owned by Jim Beam since 1987, paving the way for a small batch version of OGD to be included in Beam’s Small Batch Bourbon Collection. The better tasting barrels of Old Grand Dad are set aside to age longer, and are eventually bottled at a lower proof to make Basil Hayden’s, but it all starts off as the same distillate, born of OGD’s unique “high rye” recipe and proprietary yeast strain.
None of the three Old Grand Dad variants carries an age statement, which legally dictates that they are aged at least 4 years. By contrast, Basil Hayden’s carries an age statement of 8 years and is bottled at 80 proof.
All three are medium amber in color, with each becoming slightly darker as the proof goes up.
86 proof
Light, clay to dry/floral spice on the nose. On the palate, it starts off pleasant, though lacking complexity. The finish is respectably long, but the direction the flavor profile takes doesn’t do much for me. It seems that the spice notes and other flavors are at odds with each other.
100 proof
Similar nose to the 86 proof, with a bit more intensity, and more prominent oak notes. A little more complexity, beautiful spice flavors, and a longer, more intense finish. The flavors are much better integrated from start to finish.
114 proof
The nose is still in the same vein, but with more intensity/density of aromas. A little punchy and kind of hot. Generous rye spice notes, but the flavors seem to dart around a bit at times. Compared to the 100 it comes across as edgier but also less sophisticated.
I don’t really feel that I’m qualified to rate whiskies on a 100 point scale, but for the sake of comparison I’ll do it here, giving them an 82, 88 and 86, respectively. 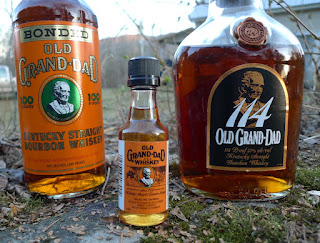 Love this post and the fact that you give time to the distinctions among these three budget friendly options. i'm working my way through a bottle of 114. I think I'll pick up the 100 next. Thanks for the stimulating reading.