stats: Wild Turkey 101, Kentucky Straight Bourbon, 101 proof, $21
Wild Turkey 80, Kentucky Straight Bourbon, 80 proof, $18
Last month, when I did the Jim Beam review, I said there were other Bourbons in the same price range that I would choose to drink first. If I am going to make a statement like that, I suppose I should put my money where my mouth is. In my early days of Bourbon drinking, Maker's Mark set the standard. It was the one that drew me in and turned me on to Bourbon. But with limited exposure to the variety of Bourbons available, that was were I drew the line - anything more expensive / exclusive was to be sought out, and anything less expensive / more common wasn't worth my time. Eventually I got around to sampling some of the everyday Bourbons, and found some real gems (along with coming across some higher end examples that really weren't up to snuff). The Weller Old Antique 107, which was reviewed when this blog was in its infancy, was one such eye opener. Wild Turkey was another pleasant surprise.


Wild Turkey 101 has been around since 1940, with the 80 proof version being added in 1974. In recent months, an 81 proof version has been introduced, which will replace the 80. It is supposedly aged a bit more than its predecessor, but neither carries an age statement. I've always preferred the 101 over the 80, but I find that the 80 is more common in bars. I'm assuming the bar owners buy the less expensive one, thinking consumers won't know the difference. I've squinted across many dimly lit bars to see which version is on the shelf before ordering.
They appear to be the same hue of amber, but the 101 is significantly darker. They are similar on the nose, but the 80 seems quite a bit more aromatic. On the palate, the 80 has a moderate burn which is countered by pleasant notes of caramel and vanilla that fade into a slightly spicey finish. It's balanced and enjoyable, but perhaps a bit too subtle. What the 101 holds back on the nose, it lets loose on the palate. The balance is still there, but everything is intensified compared to the 80. It burns a bit hotter, but that is backed up by greater depth of flavor. The finish, however, is where the 101 really shines - waves of spice linger on for quite some time and slowly fade. I have a feeling that this Bourbon is generally under-rated and not recognized for the value that it is. I went back to the 80 for a follow up taste, and expected it to seem weak and watered down, coming from the 101. Surprisingly, I still find it quite pleasant in spite of it being fairly mild mannered.
Just to make it official, a taste of Jim  Beam White Label. It's okay, but I can see no reason to drink it if either version of the Turkey was on the shelf, even with a slightly higher price. 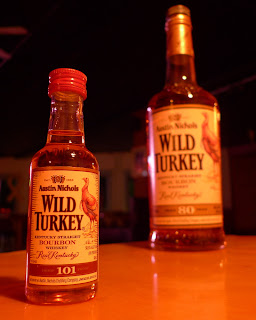 and it is produced with non GMO corn, one of only 2 in the US (Four Roses the other).

Thanks for the comment, I was unaware of that and under the assumption that there wasn't enough non-GMO corn grown in the U.S. to supply any of the major Bourbon distillers 100%. It will be interesting to see how cross pollination of crops affects the situation in the coming years.

In the back of my cabinet I found an unopened 101 & 80 that was given to me years ago. Time to test it I guess.
Also have some Jefferson, and a few others.
We are visiting Kentucky for the first time this August, and will drive from Louisville to Bowling Green. Hope to visit some nice distilleries. Still doing the research.
Any suggestions would be greatly appreciated.

Sampling the 101 right now, almost bought the 80 because I typically prefer lower proof. Heavy vanilla/caramel nose on the 101. Even poured over 2 ice cubes the immediate sip is hot on the throat because it's the 101, lots of spice that lingers, cinnamon, almost chile spcice like, char. As the ice starts to melt it tones down the heat and the caramel starts to come through with the oak and char, also a little butterscotch. It's a full flavored bourbon, but the proof, heat and spice would not draw me to purchase this again necessarily, but I really wanted to give it a try. Will try the 80 next for sure though ! BTW My standard for Whiskey & Bourbon currently is HIRSCH Small Batch Whiskey out of Indiana of all places if you see it it's probably about $30 and you are not going to find a better whiskey or Bourbon for that price, OUTSTANDING and I don't like to waste it in a Manhattan.

101 is my daily driver.
the horsepower is just right.
it starts out like a two stroke off the line,and finishes very smooth like a four stroke.
i like enjoying new bourbons regularly, but always have 101 on the shelf.